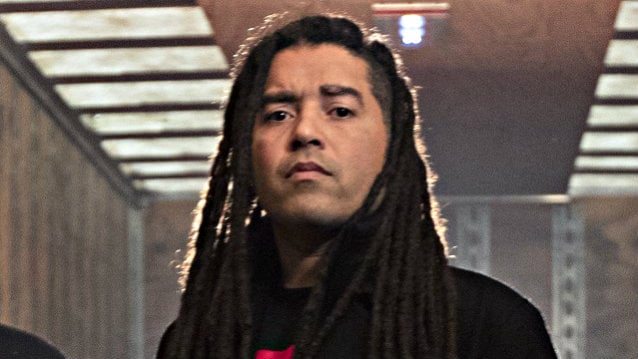 NONPOINT Frontman Slams Internet Trolls: 'If You Don't Like It, You Don't Have To Listen To It'

NONPOINT vocalist Elias Soriano was recently interviewed on "The Rockside Chronicles With Shawn SixX" via Shockwave Magazine. You can now listen to the chat using the SoundCloud widget below.

Speaking about how NONPOINT has managed to survive two decades as a recording and touring band, Elias said: "I learned to not pay attention to the unimportant parts of the business. It's not necessary for me to read every single review, to read every single negative post and to answer it. There's certain limitations that you should put on how deep you're gonna let your personal feelings get involved with your livelihood. And I learned personally that I stay away from as much of the traditional troll or just that culture of being online [and posting negative comments]… I don't even pay it any attention. I talk to people that reach out to me in a positive light, and I try to keep things positive when I post. So that way people know how to deal with me, and the ones that don't and don't act accordingly, then I deal with them accordingly, which is to ignore 'em. If you have nothing nice to say to 'em, say nothing at all. Sticks and stones, you know… honestly."

He continued: "It doesn't fucking matter anymore. It really doesn't. I don't give a shit what some fucking asshole in Detroit thinks of my band because we posted something and he didn't like it. It is what it is. We took a swing. At least we took a chance, we put up music, we're going in, we have a label and a management team — all the inner workings — because other than that one freaking dude, other people feel like we should continue to make records and release music. So I don't bother or bog myself down or anchor my life with anything outside of the things that are moving forward."

Soriano went on to express his bewilderment at the fact that Internet haters expend so much of their energy posting negative comments when they could do far more productive things with their time.

"What's crazy is that, what am I doing? I'm writing music. I'm not even doing anything that's physically affecting them," Elias said. "I could understand if I was standing on podiums chanting far-right or far-left politics and everything, [but] it's not that. I'm just trying to pull into your town, pull into a club, put on a show for you, have a good time and have something to drink to and sing and dance along to, and then leave. It's not rocket science. It's supposed to always be positive and good times. If you don't like it, you don't have to listen to it. Why are you wasting twenty minutes typing a four-page-long blog on why you hate whatever it is that you hate online that day? It's really, truly pointless."

"The Poison Red" was the first NONPOINT album to feature lead guitarist BC Kochmit, whom Soriano has described as "Eddie Van Halen's illegitimate child."