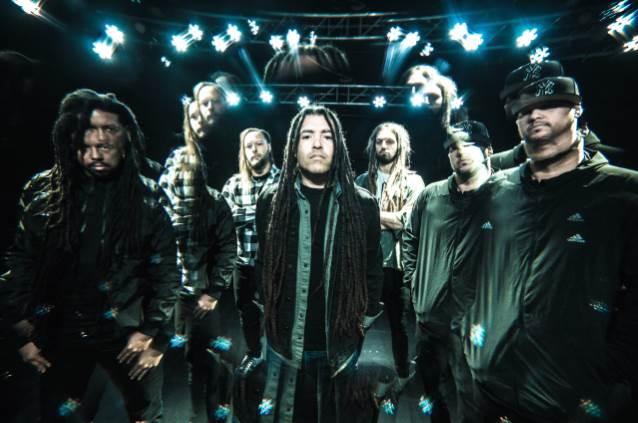 NONPOINT's music video for the song "Chaos And Earthquakes" can be viewed below. The track is taken from the band's tenth album, "X", which will be released on August 24. The follow-up to 2016's "The Poison Red" was produced by Fred Archambault, who has previously worked with ATREYU and AVENGED SEVENFOLD, among others.

"We've had our moments in videos before when we capture the vision, or attitude and even the energy of our live shows," said singer Elias Soriano. "But this video is the closest I've ever seen us get to capturing all of them in one so well. The director Eric Richter and his team really caught lighting in a bottle with the band's performance and the vision of the music in this video brilliantly."

In a recent interview with Bods Mayhem Hour, Soriano stated about working with Archambault: "['The Poison Red' producer] Rob [Ruccia] also worked on this record as well. He not only played bass, but he was mainly the engineer of this record because it's the studio he works out of, the Uptown [Recording], he is their head engineer. He's an amazing friend and dare I say, sixth member of the band.

"We've done a lot of records ourselves and when we get the opportunity to work with somebody with Fred… Originally, it was supposed to be Brian Virtue, which we were really excited about. But, unfortunately, he had a really dire family emergency he couldn't step away from, wholeheartedly knowing he could get a phone call and he'd have to go back home. We understood where he was coming from. The label got on the phone, got people we were speaking to as well as Brian in the beginning. Got them on the phone and had a great conversation with Fred and he jumped right in. It was a great process. He's a real positive dude who loves to work ideas, loves to add layers and really set a mood and add DNA to a song. He just, you know, pretty much, he loves what we were doing with the writing of our music. He just, like he said in the phone call, he just really wanted to make it sound like the most powerful NONPOINT that we've ever put out."

Elias added that "X" ended up being "the fastest record that we've ever recorded because we were so prepared going in. It was really just about tracking it, but I would say [it took about] 25, 26 days. Like I said, the music was written. It was just about making it as sound as great as we could. I mean, like I said, the songs were already written. We went in with the pre-production already done. We had already decided what we wanted. After that, it's just performance and making sure you get the right tones. Fred's a professional, Rob Ruccia is a professional. We're on our tenth record, so we went in prepared."