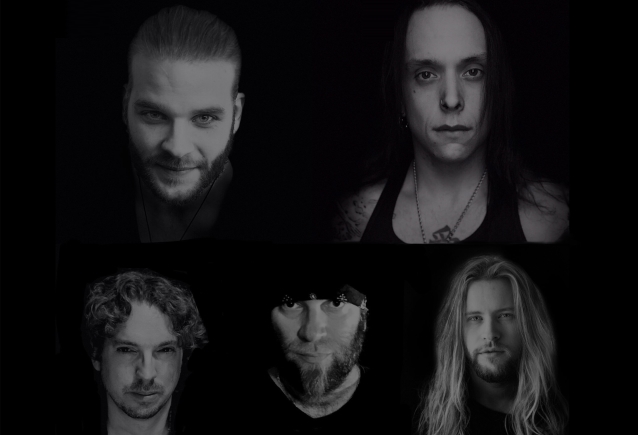 NORTHTALE, the newly formed Swedish/American melodic power metal band, has made its first track, "Shape Your Reality", available for streaming.

NORTHTALE was born out of the desire of three world-class musicians to work with each other in creating a new band, one that blends melodic, anthemic choruses with fast-paced rhythm section and technically challenging and often keyboard and guitar harmonized solos.

Guitarist Bill Hudson says: "We're trying to recreate the feeling we had when we first heard our favorite power metal bands. Especially in the late '90s, when STRATOVARIUS, HELLOWEEN, BLIND GUARDIAN, GAMMA RAY and all those bands were at their peak."

Hudson met frontman Christian Eriksson at a summer festival in Sweden, where both were performing with their former groups, DIRKSCHNEIDER and TWILIGHT FORCE, respectively. The two musicians seemed to share the same ideas, musical and otherwise, which led them to develop a mutual admiration and vowed to work together at some point in the future.

“We were both in touch with Patrick Johansson about starting a new band," says Eriksson about the former YNGWIE MALMSTEEN drummer. "It only made sense that him, Bill and myself did something together. That's basically how it all started."

For the bass, Eriksson brought in his former classmate back in his
days at Hollywood's Musicians Institute, Mikael Planefeldt from the
band STREAMLINE.

Jimmy Pitts seemed like the obvious choice and perfect fit to complete the band's lineup, as he had previously worked with Hudson alongside virtuoso pianist Vitalij Kuprij (TRANS-SIBERIAN ORCHESTRA, ARTENSION, RING OF FIRE).

As a full working unit, the band has finished its debut EP, which was mixed and mastered by Pontus Norgren (HAMMERFALL, TALISMAN) and co-engineered by Damien Rainaud (DRAGONFORCE, BABYMETAL, ALMAH) and Dewayne Hart (KINLIN).