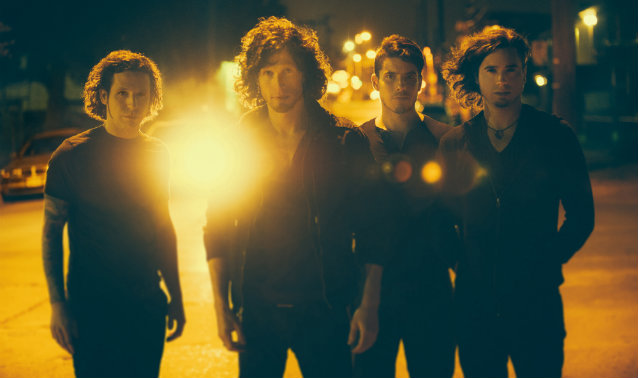 The official lyric video for the song Christ Copyright" from San Antonio, Texas alternative rockers NOTHING MORE can be seen below. The track is taken from the band's self-titled debut, which came out on Tuesday (June 24).

NOTHING MORE is a four-headed musical hydra that runs on frenetic passion, unswerving DIY spirit and relentless sonic experimentation. Part THE MARS VOLTA-esque prog rock freak out part schizoid SYSTEM OF A DOWN weird-isms, part effortless pop nous, they seamlessly barrel from churning headbang to skyscraping chorus and back again in the blink of an eye.

NOTHING MORE are part of a new generation of rock stars who are unconcerned with fabricated notions of how and where they might fit in, but simply focus on making honest, passionate art with real intent. "When we first started, we branded ourselves on the arm after each year of touring, so we’ve all got these scars now, reminding us of the commitment we made to each other. We want to be a church for people who don't believe the things that churches believe," comments singer Jonny Hawkins.

Capable of bombastic bounce that hits as hard as an uppercut to the jaw when they fancy it, the boys from The Alamo City are equally able to dial down their bluster into deft moments of crystalline beauty when the mood takes them.

Like all the best bands, NOTHING MORE formed initially as school kids. Kids whose aspirations were as serious then as they are now, and whose early development took place against a backdrop of suburban boredom and rabid musical obsession.

In the live arena, NOTHING MORE are absolute animals. Raw aggression crashes alongside precise riffing, thunderous bass and nigh on tribal percussion to jaw-dropping effect. They've grown through the grassroots by dripping blood sweat and tears across America, challenging the stereotypes of what you might think a band like this can incorporate into their show. Four way drum battles? Check. Three members playing one bass guitar? Check. These guys push the limits in more ways than one.

The CD's first single, "This Is The Time (Ballast)", is about "the 'greater good' that many of us claim to be fighting for becomes perverted the instant it becomes about changing others. It is about changing ourselves and as a result others will inevitably be changed," according to Hawkins. This alone gives a hint that this band have a keen lyrical sophistication and philosophical undertone which both belies their years and marks them out from their contemporaries. When Hawkins sings, "Holding each other like ransom notes, Dropping our hearts to grip our brother's throat," you believe him.