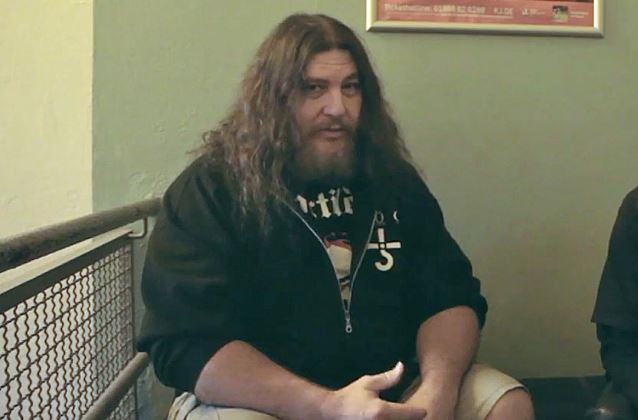 On November 9, former DEATH/MASSACRE and current OBITUARY bassist Terry Butler gave an interview to Mammoth Metal TV in which he offered up his reaction to the stunning news that Donald Trump won the 2016 U.S. presidential election over Hillary Clinton. Asked for his opinion of the president-elect, Butler said (see video below): "Well, you know, I kind of like it the way… I mean, I know he says things… He says things like a guy in a bar would say. I'm on the road a lot and I hear this kind of talk all the time backstage. He says stupid things. Hillary's actually done stupid things that actually hurt and has killed people. And with Hillary, you're gonna get four more years of Obama, and I don't want that."

He continued: "I understand everyone's concerns about Trump, you know… building a wall [along the Mexico-U.S. border]. But hey, what's wrong with protecting your borders? In this day and age, there's people that wanna kill you and everything about you. If you don't believe in their religion, or you don't look the way they do, or do what they want you to do, they're just gonna kill you. We see it all the time, you know — Paris, the Bataclan, Brussels airport… I can name hundreds of incidents. What's wrong with protecting your borders? I don't have a problem with that at all. So… we'll see. It's gonna be interesting, definitely. [Laughs]"

Butler added: "I mean, [Trump] gave a good speech, and hopefully the Democrats work with him. 'Cause we're all Americans. Let's work together, and whatever, and not be divided, you know. We'll see."

Trump shocked the political establishment and the world by becoming the 45th president in one of the biggest upsets in U.S. political history. He won with 289 electoral votes compared to 218 for Hillary Clinton. 270 were needed to win. Clinton, however, is handily winning the popular vote, despite losing the overall election.

While many rock artists had been against Trump, artists like STAIND's Aaron Lewis, Kid Rock and FIVE FINGER DEATH PUNCH's Zoltan Bathory had thrown their support behind the real estate magnate, who has no previous governing experience.