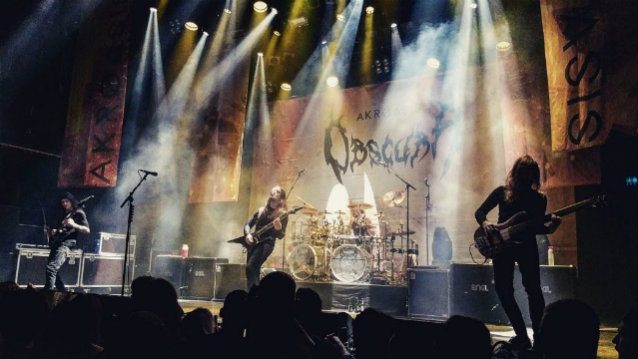 Technical death metal masters OBSCURA have entered the studio to record their yet-to-be titled fifth full-length album. The record is the final of a running four-album concept cycle that began with "Cosmogenesis" in 2009. The band is recording the album with longtime producer V. Santura (TRIPTYKON, PESTILENCE) at Woodshed Studios in Landshut, Germany. A summer 2018 release via Relapse is expected.

Vocalist/guitarist Steffen Kummerer commented on the new material: "With our new album, we complete a four-album cycle that started back in 2009 when 'Cosmogenesis' saw the light of day, followed by 'Omnivium' in 2011 and our most recent record, 'Akroasis', which was released earlier last year. Four albums linked in depth in terms of music, lyrics and visuals turned into a consistent ten-year-long effort.

"We enter Woodshed Studios alongside our longtime producer and friend V. Santura to record our most experimental and progressive record to date.

"While we took off the upcoming three months to record and produce our new album, we will finish the 'Akroasis' world tour with additional tour dates around the globe in 2018."

In other news, OBSCURA has announced the vinyl reissue of "Cosmogenesis". Repressed on vinyl for the first time since its original release in 2009, the record is a front-to-back stroke of brilliance that seamlessly fuses modern metals extremity, the upper levels of technical virtuosity, and the symphonic grace of progressive music into a flawless album experience. On "Cosmogenesis", OBSCURA more than justified its impressive pedigree as technical metal masters, an album that has since been regarded as one of the best metal albums of the 21st century.

The vinyl reissue of "Cosmogenesis" is due out November 3.