After a two-year break, guitarist Ronald Bekking, pianist Hans Grotenbreg and bassist Jeroen Paul Thesseling (OBSCURA, ex-PESTILENCE) have resumed work on new recordings for their project ENSEMBLE SALAZHAR. "We received a lot of positive reactions on the demo recordings of 2006 — produced by percussionist Jaap Van Keulen — and are excited to write new songs for a possible EP album," the band says in a statement.

ENSEMBLE SALAZHAR was founded in 2005 by Ronald Bekking and Jeroen Thesseling with the intent to bring world music into dialogue with other modern styles.

Thesseling joined the German technical death metal band OBSCURA in late 2007. The group recently signed with Relapse Records and has completed the recordings for its second full-length album, to be released in early 2009. 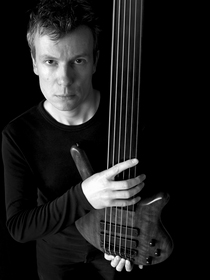