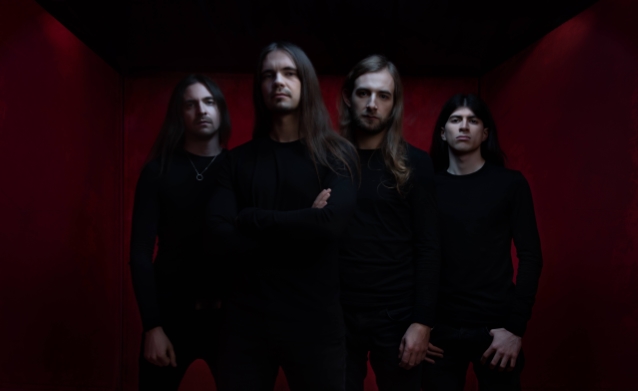 Alex Haber of Heavy New York conducted an interview with frontman Steffen Kummerer of German progressive death metal masters OBSCURA prior to the band's September 26 concert at Knitting Factory in Brooklyn, New York. You can watch the entire chat below. A few excerpts follow (transcribed by BLABBERMOUTH.NET).

On the making of their most recent studio album, "Diluvium":

Steffen: "Basically, 'Diluvium' took us around three months into a studio where we actually always work; it's called Woodshed Studios in Landshut, Germany. The whole recording went pretty smooth this time. The only thing that changed was that we recorded the drums outside, but not in an external studio, but we basically optimized the whole studio situation where we rehearse at home. That means we put a lot of budget into optimizing the acoustics in the room to record the drums there. The whole sound of the drums is way more natural than you might expect from a technical death metal band. We're not working with sound replacement, we're not working with, yeah, of course, with editing and post-production, but not as you might expect, so, basically, what you hear is musicians are playing on the record. That is something I really love from rock productions from back in the '70s, '80s and this is what I try achieve with this band, especially with the production for 'Diluvium'."

On whether OBSCURA had to keep the music consistent since their last three albums are part of a concept, or, each record was its own experience:

Steffen: "Actually, both at the same time. Since we had a certain path, we had to follow since we had the idea, 'Okay, we are writing an album about this and that certain topic.' We also had to write music that is fitting to the certain topic, but at the same time, we had enough freedom to change from an album to album. To explain it a little bit more in depth, 'Akróasis' was meant to more or less deal with the unconscious, which means we thought about going more into the prog direction, which means the arrangements, the whole guitar settings have been in the way of being a wall of sound, so many delay lines, many layers above each other while 'Diluvium', the new record, deals with basically the ultimate apocalypse, which was the main idea before we even started writing songs, to have a very direct approach, like a straight in your face attitude, which also leads to a direct approach to produce the records. So, while 'Akróasis' was, as I mentioned, built into a wall of sound with many, may guitar layers, 'Diluvium', was more or less built on the classic two guitars, one guitar right, one guitar on the left side, still playing very complex music, but very direct. That fits that whole topic at the same time as the topic fits the music."

On whether OBSCURA's lyrical concepts are open to interpretation:

Steffen: "Absolutely. To be honest, most of the fans are not dealing with the lyrics at all. They see, okay, it's a blue album with a couple of planets and stuff, as I hear a lot of times, and they just interpret whatever they want into the music, which is fine, to me. But to get the whole picture, you have to see the lyrics, you have the read the lyrics, you have to take care and see all the same little details in the artwork, but also the music, so it's the whole package, so to say."

On the differences in approach between OBSCURA and his black metal side project, THULCANDRA:

Steffen: "[THULCANDRA] is a little open since there are also a couple of other people involved and it's not that strict; we just do what we want to do. We don't have a certain plan when we want to record or release a new album. We are open-minded, which also gives us more freedom. OBSCURA is like a big machine these days. We are touring worldwide since 2006 now and also, the band has been around since 2002, while THULCANDRA is completely free to do whatever we want whenever we have time for it. It gives me personally a lot of freedom and the same goes for concepts and artwork. Again, it's two different worlds."

On the technical death metal scene in Southern Germany:

Steffen: "I would say there was a more international scene. When we started to get more and more technical, we played exactly the same clubs as NECROPHAGIST at the time. I saw them multiple times playing in Munich at the same clubs we played. All of the sudden, it got the big bang when NECROPHAGIST somehow turned out to be big in the United States, then it went backward to Europe, but before that, no one cared about it. Everybody was listening to black metal. When we started with what we are doing or still doing with this kind of merging styles with pretty much a technical approach, no one thought we would last long. Now, we are here 16 years, in our 16th year of existence and we still love what we are doing. Talking about German technical death metal, there's not too much left. Back in the day, there was PROFANITY, but that's it, I would say."

"Diluvium" was released July 13 on CD, LP and digital via Relapse Records.

OBSCURA completes its long-running, four-album conceptual circle with the release of "Diluvium" (defined as a great oceanic flood), the band's most evocative, diverse and vibrant release to date. 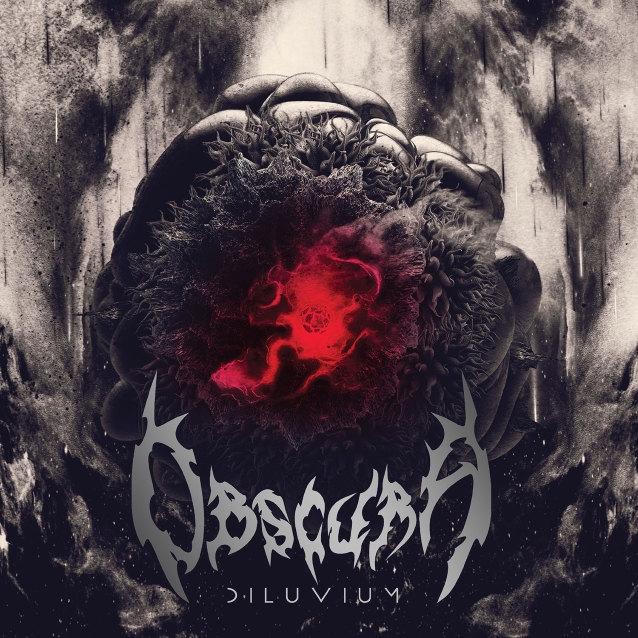