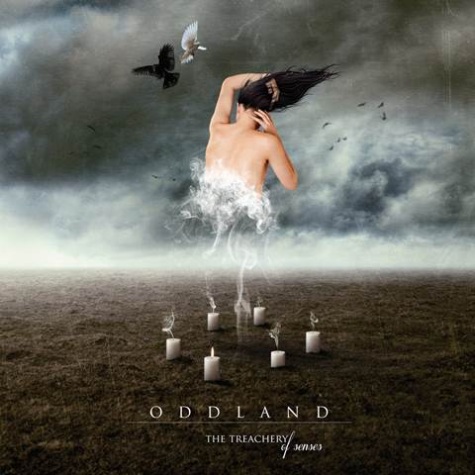 Century Media Records, the Finnish Metal Expo, Inferno magazine, Terrorizer magazine and Imperiumi.net joined forces in 2010 to find the "Suomi Metal Star 2011." Around 240 Finnish bands signed up to take part in the contest and 12 were selected to be voted on by the public prior to the end of that year. The four finalist bands played at the Finnish Metal Expo in Helsinki in February 2011 and it was ODDLAND from Turku who won over the majority of the jury members with its brand of sophisticated prog metal/rock — described as a cross between DEVIN TOWNSEND, OPETH and KATATONIA.

After spending months writing new material, ODDLAND has finally released its debut album, "The Treachery Of Senses", on April 30. The effort will be made available in North America on May 8 as a digital download only.

A teaser for "The Treachery Of Senses" is available below.

"This record was long in the making, as most of the tracks were already composed when we got signed by Century Media, but even the older songs evolved a lot during pre-production," says ODDLAND vocalist/guitarist Sakari Ojanen. "We feel that in the end we succeeded in making a great record as a whole, rather than just a collection of individual songs."

He adds, "Working with Dan Swanö was very satisfactory — he really helped us attain the sound we were after. Also worth mentioning is the contribution of Samu Oittinen at Fantom Studios, who helped us nail the organic sound we wanted for the raw tracks.

"We feel there isn't too much of this kind of music out there, so hopefully 'The Treachery Of Senses' won't go unnoticed. In the end, we couldn't be happier with the outcome — we feel we made a killer debut album."

Swanö states: "One of the best albums I have mixed. Ever! Incredible songs, stellar musicianship. I am proud to be a part of this amazing record!"

ODDLAND teamed up with Elton Fernandes to perfect their artistic vision for "The Treachery Of Senses" album. Check out the cover artwork below.

"The Treachery Of Senses" track listing:

The song "Flooding Light" can now be streamed below.

ODDLAND was formed in 2003 when four 18-year-old "wimps" decided to play heavy music to as a mental anti-acne medication. The mental acne never disappeared, but neither did the passion to play overdriven music with captivating melodies and intense energy. So far they made two recordings: the EP "Connecions Critical Behind" (2007) and the demo/promo "Away From The Watching Eye" (2009).