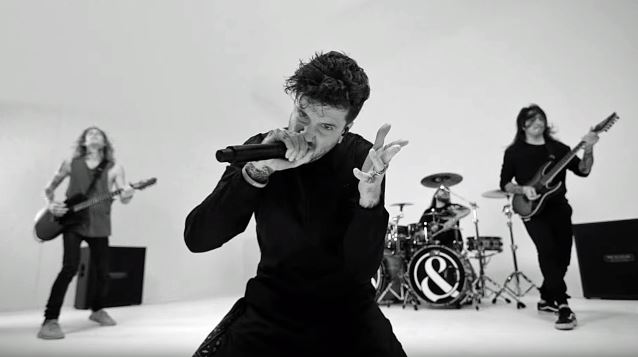 Vocalist Austin Carlile of the California band OF MICE & MEN has been admitted to hospital after the band was forced to cancel the remaining dates on its European headlining tour.

Carlile has a history of medical issues going back several years that have had an impact on OF MICE & MEN's activities, not to mention his own life.

When he was 17, Carlile was diagnosed with Marfan syndrome, which affects his connective tissue and causes weakness in his heart, lungs, ears, joints and muscles.

Carlile said: "As most of you know, I battle daily with a rare fibrostic connective tissue disorder called Marfan syndrome. Due to recent issues arising from this, we have cancelled the remainder of our European tour.

"It breaks my heart but the band and myself have decided it was unsafe for me to continue on in this state of health. I'm being admitted to Stanford University hospital where my specialists have been informed and are prepared to figure out what exactly is wrong. I will remain there as long as needed to run tests and come up with an assessment of what exactly is causing my body and heart to seize up.”

The singer apologized to fans for having to scrap OF MICE & MEN's last 12 European dates, and added: "I would never cancel unless a limb was falling off or it was endangering my life. Unfortunately, it has become the latter.

"Thank you to those who understand and support this decision. I promise to keep pushing and treat this as another hill to climb.

"My dad has flown from Costa Rica, and my team at Stanford are like family to me, so know that I am not alone. I also know I have all of you, and times like this reassure and warm my heart to know you stand with me as well.

"Please do not worry for me — there are multiple things more important happening in the world right now. Besides, God has a plan, all of this is in His hands at the end of the day and I'm ready for whatever comes next."

The singer has had surgery on his ears, hip, heart, head and feet over the years, with operations last year on his ribs and skull forcing him to cancel a series of tour dates and undergo months of therapy.

More recently, he suffered a collapsed lung during OF MICE & MEN's set in Denver this past August but still finished the show.

Despite his ailments, Carlile decided to quit a daily dosage of OxyContin, Ritalin and anti-depressants last January, saying, "The next three months of my life, which was when we were in the studio, those were the worst months."

The new OF MICE & MEN album, "Cold World", came out on September 9. The first single and video from the band's fourth record is called "Real". The disc follows up 2014's "Restoring Force", which featured the singles "Feels Like Forever" and "Never Giving Up".