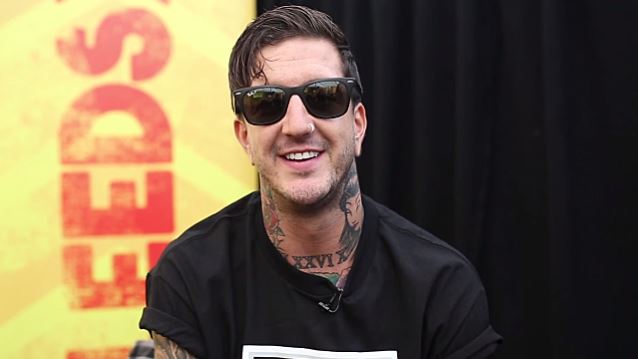 Vocalist Austin Carlile of the California-based rock quintet OF MICE & MEN spoke to Revolver magazine about being asked to open for LINKIN PARK on the latter act's European tour last November — a huge honor for Carlile, who counts the Chester Bennington-fronted group as one of his formative musical influences.

"I bought 'Hybrid Theory' when I was a sophomore in high school," Carlile remembers. "It was the angriest thing I'd ever heard at the time, other than PANTERA — but PANTERA was my dad's music, and this was the first record I really got into that I didn't learn about through him. LINKIN PARK has been my band for such a long time."

OF MICE & MEN has set a February 24 release date for "Restoring Force: Full Circle", a deluxe double-disc, foil-stamped digipack that includes three brand-new songs and an acoustic version of the band's hit single "Feels Like Forever".

The new songs — "Broken Generation", "Something To Hide", "Never Giving Up" and the acoustic version of "Feels Like Forever" — were recorded this past fall with producer David Bendeth (PARAMORE, BRING ME THE HORIZON) in Southern California.

The two-CD set is a special reissue of the album "Restoring Force", which hit No. 4 on The Billboard 200 chart and No. 1 on both the Billboard Top Independent and Top Rock Albums charts.

In a recent interview with UMusicians, OF MICE & MEN guitarist Phil Manansala stated about "Restoring Force": "The whole album is about restoring the equilibrium of rock music. We have developed our sound to a new level and want to display it. We have heavy influences from '90s bands such as LINKIN PARK and KORN and there hasn't exactly been music like that around lately, so the album is really about restoring rock music and the force that it has."