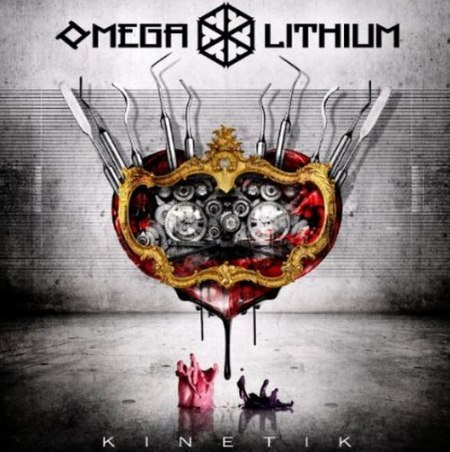 OMEGA LITHIUM To Release 'Kinetik' In May

According to a press release, OMEGA LITHIUM had a total of 40 song ideas to choose from for the new CD and "the result sounds fresh, dynamic and haunting throughout. The musicians have thrown all ballast overboard, concentrating on the bare essentials: evocative, danceable songs with concise hooklines and sexy grooves. Machines were fused with rock elements, producing a harmonic whole, and as a result 'Kinetik' has turned into a dance album, created with the tools of a rock band. A suitable pigeonhole still has to be invented for this kind of music, so perhaps we should create our own — how about 'industrial dance rock?' But irrespective of what you call OMEGA LITHIUM's music — tracks such as 'Dance With Me', 'Cut Forget' and 'I Am God' sound energetic, explosive and are clearly more mass-compatible and open-minded than the densely produced material on their debut."

"It’s a catchy album which you can't listen to without banging your head or dancing," Malice Rime enthuses. The eleven tracks were produced at the Horus Sound Studio (HELLOWEEN, HIM, DIE HAPPY, GUANO APES) in Hanover, Germany by Zare Pak and first-time co-producer Malice. Benjamin Schäfer (mix) and Vincent Sorg, who mastered the songs at the Principal Studio (IN EXTREMO, UNHEILIG) are also significantly responsible for the recording's tight and driving sound.

The lyrics on "Kinetik" cover a wide field. On one hand, there are numbers which ironically deal with sex, drugs and parties ("Dance With Me"),the self-ironic, Croatian language song "Pjesma" (English: song),in which the musicians lampoon themselves, and the sexually inspired "Strip Me". On the other hand, OMEGA LITHIUM broaches serious subjects: the title track, "Kinetik", is about an android who feels his own heartbeat and ends up not knowing whether he is man or machine. "Wind", on the other hand, is about the hidden secrets which we would like to block out and definitely don’t want to reveal to anybody. Musically, the band relies on a high degree of variation and tried a number of crazy ideas which have never been realized this way before on a rock album. "Strip Me", for example, features a Croatian Klapa choir, and "Colossus" presents a Slovenian choir, while an instrument called sopele — a traditional Croatian pipe which, according to Malice, creates very strange sounds — was used on "Breaking". So the almost 42-minute recording lacks neither variety, catchiness nor suspense.

"We've set ourselves great targets and hope that this album will bring our breakthrough," the guitarist says. "We've put a lot into it and hope that it will pay off."

Fan-filmed video footage of OMEGA LITHIUM performing the song "Nebula" at last year's edition of the Metal Female Voices Fest, which was held October 22-24, 2010 at Oktoberhallen in Wieze, Belgium, can be viewd below.

OMEGA LITHIUM's debut album, "Dreams In Formaline", was released in North America in April 2010 via Artoffact Records. The North American version of the CD includes a bonus track, "Ocean Dream", and a different cover.

"Dreams In Formaline" was released in Europe in September 2009 via Drakkar Records.