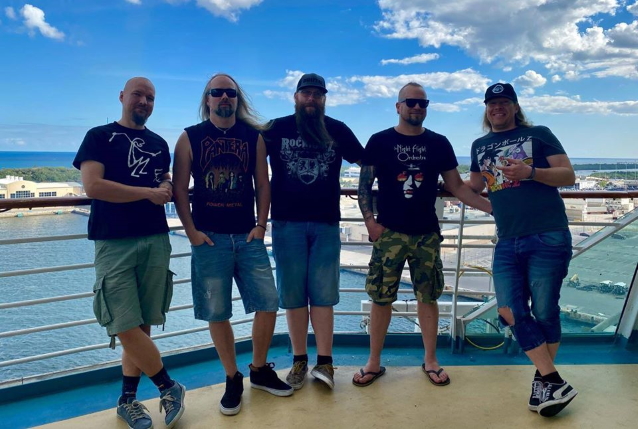 OMNIUM GATHERUM announced the latest lineup changes in a social media post earlier today. The group wrote: "As you all know times and situations change in life all the time.

"On the positive side of things — We're hard at work composing the new album stuff, and our bass player spot has finally been officially filled with our brother in arms — welcome Mikko Kivistö! This charismatic bass beast has already been playing gigs and conquered stages with us almost a year, and is previously known from the Finnish group PAIN CONFESSOR. As a human being and as a musician he fits absolutely very well to the OMNIUM GATHERUM horde!

"Here are Mikko's thoughts on the matter:

"'Im totally honored to be part of OG gang. Back in May 2019 I played my first gigs with the boys in Russia and it immediately felt I was in a right place with the right band. It felt like a dream come true! Last year was super, a lot of festivals and an European tour. It was easy to join the band with full of pure hearted guys I now can call my brothers and family. I will promise to continue to smash the bass at least as hard as all the previous guys did. Hopefully we'll together beat this COVID-19 soon and see you all again in festivals, tours and gigs. Thank you OMNIUM GATHERUM for trusting my skills. See you all soon. Stay safe and let the metal flow!'

"On a bit more negative side of news - Our long time guitarist Joonas Koto decided to leave the group, already a while ago. There was no bad blood or fighting behind the decision, just a surprise and a shock. Joonas was just tired of active touring and travelling. We wish all the best for Joonas in his future endeavours!

"Our brothers in metal, Jani Liimatainen and Nick Cordle have been helping us filling in as a 2nd guitar player on our gigs lately. Thanks dudes, and we salute your awesomeness!

"At the moment we are operating officially as a 5-men unit, and composing the next album by storm and quarantine -

"BUT, if you feel you (or someone you know) would have the guts, the balls, the bad jokes and the abilities for what it takes to be an OMNIUM GATHERUM guitarist and part of the horde — feel free to contact the band and we’ll see what future holds — Search is on!!"

BASSIST IN - GUITARIST OUT

As you all know times and situations change in life all the time.

On the positive side of...