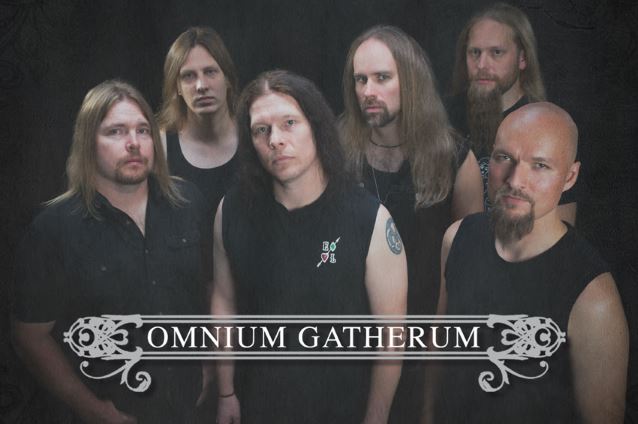 Having previously been signed to the label for North America with their latest album, "Grey Heavens", the band's upcoming efforts will now be released worldwide via Century Media.

"Last years have been really good for OMNIUM GATHERUM and joining Century Media tour de force is a natural next step on our path to limelight and glorification.

"I've known Jens and the good staff of Century Media many years and I know they're hard-working, honest and very nice people to hang out, so we're very much looking forward to this shiny partnership!

"We wanna send out our biggest thanks and respect also to Mr. Stefan Lüdicke and Lifeforce Records for saving us back then and doing a really good job for the band many previous years. May the force be with us all and many good evil things to follow!"

Adds Jens Prüter, head of A&R at Century Media: "It's already seven years ago when we first met at legendary show in my 'live living room,' the Turock club in Essen, Germany. SWALLOW THE SUN, INSOMNIUM and OMNIUM GATHERUM was the dream package for every fan of dark metal! We stayed in contact over all the years and I'm really happy that we now can complete the trio of this very remarkable night.

"The last OMNIUM GATHERUM album, 'Grey Heavens', turned out to be a high point of their almost-20-year-long career and we all know that the band will continue to grow.

"I want to thank my friend and OMNIUM GATHERUM founding member Markus Vanhala for the trust in Century Media and I would also like to thank Stefan Lüdicke from Lifeforce Records for the great work on the last three albums!"

OMNIUM GATHERUM recently announced the addition of Tuomo Latvala as the band's full-time drummer after one year of solid prospect member service. Tuomo is a drumming instructor at his private drum school in Turku (Southwest Finland),and also plays in TORTURE KILLER. He has previously played in such bands as DEMIGOD and HATEFORM.

Next in line for OMNIUM GATHERUM will be heading to North American tour for November and December, and after that, the 70000 Tons Of Metal cruise in early February.