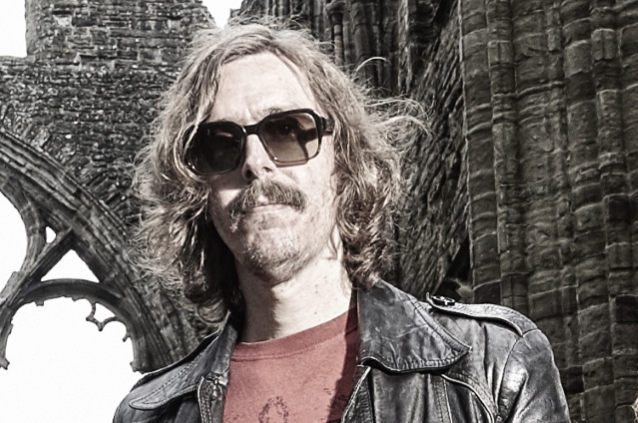 OPETH Frontman Says Fans Can't 'Dictate' Group's Musical Direction: 'We Just Do What We Want To Do'

OPETH vocalist/guitarist Mikael Åkerfeldt recently spoke with Owais "Vitek" Nabi of Metal Wani. The full conversation can be streamed below. A few excerpts follow (as transcribed by BLABBERMOUTH.NET).

On how he's been enjoying OPETH's apparent time off:

Mikael: "I don't think, in retrospect, that I took so much time off, because we went off tour in November last year, and after Christmas, I was already in the studio working [on] new music. I didn't get the break I wanted to have, but it was more or less self-inflicted, because I decided to go down to the studio to see what happens. Since then, we've been working, and we've been putting together this live DVD ['Garden Of The Titans: Live At Red Rocks Amphitheatre'], so it's really not so much rest, even if it's been away from the touring scene since November [of 2017]."

On the motivation behind releasing "Garden Of The Titans":

Mikael: "I'm not the biggest fan of live albums myself, especially not our own, so I'm not sitting around every day playing the live album, like, 'Oh, I'm so good.' But I'm hoping that there's OPETH fans out there who want to hear this and see the DVD and all that stuff. It's our fourth [live] album, and I think it's relevant because it features songs from the last three albums which we haven't recorded before. That's one of the reasons why we decided to put it out — that and the fact that we have been away since the last tour. We wanted to put something out just so people wouldn't forget about us."

Mikael: "I thought [of] U2. That was the first thing that popped into my head when somebody mentioned Red Rocks — 'That's where U2 did the 'Under A Blood Red Sky' album.' Not that I'm a big U2 fan at all, but I knew about the place. There's certain venues around the world that you've heard about, and Red Rocks was, I would say, in the subconscious, I think it was on the bucket list that we wanted to play. It was also one of those unreachable venues because it's so special, and I figured they would never let a band like us play there — but that's also what I thought about the Sydney Opera House and what I thought about Radio City Music Hall in New York, Royal Albert Hall in London. This was one on the bucket list, and I was really happy that we were given the opportunity to play there, and also to make a recording of that night. It was a special night, and I'm really happy that we have it on film now, like proof that we've been there."

On the DVD's visual presentation:

Mikael: "To me, it's almost like live DVDs or TV shows these days, it's like they're made for children with ADHD. There's so many cuts. It's so much information all the time — so many angles — and I'm used to, like, '60s, '70s films where there's long camera takes, that type of stuff. That's my personal favorite. But seeing that we are not one of the more animated bands on stage — we basically just stand there playing the songs — you have to kind of make it a little bit interesting, so I figured maybe that's a good way to make it not as dull. Also, because it was a windy evening — it was freezing cold and windy — I think it makes it more exciting, and it makes it look more turbulent, exactly as it was and how it felt for us."

On the evolving perception of the band's decision to move away from their progressive death metal roots:

Mikael: "I can't dictate the rules of what type of music is good or what type of music people should listen to, but you have to also put it in reverse. Even if we've got fans who like a specific record or a specific string of albums that we've done, they cannot in turn dictate the rules to us of what we should do, because we just do what we want to do. I don't want to compare myself to any other artist, but the artists that I like the most are the ones who developed. I'm not the same guy that I was when I was 19. There are many similarities, but I'm not the same. I've gone through the motions with my own consummation of music and I've developed and widened my taste in music, and it would be strange if I didn't let that infiltrate the sound of the music that I write. In retrospect, I think some of these albums that we put out that got a lot of criticism — bad criticism, like [2011's] 'Heritage', for instance — with time I have met people and you see when we play songs from there now, it's different to what it was when we played it back then. When we played 'The Devil's Orchard' when the album had just come out, people were like, 'What the hell is this?' Now, it's just a song that they like. Some people — I understand not all of them, but some people have embraced 'Heritage', while in the beginning, maybe they thought that they would never play that album again. What happened in the end is that we have fans who come to the show from all fans of life. It's not just metal fans — it's rock fans, prog rock fans or whatever. Some people like this era of the band; some people like that era of the band; some people like everything. That's a good position to be in for me. That's how I am. There was a point in my life where I figured I will never listen to soft music — I will only listen to extreme grindcore, and that's it. Obviously, that wasn't true, because in the end, I discovered Joni Mitchell, and I discovered classical music and jazz music, and now, it doesn't matter what genre it is. If it's good music, I like it. I want to be in a band, in a musical environment that pushes for that — that pushes for musical expression regardless of the genre, and musical freedom. That's how I perceive things, and ultimately for me, as a musician, I am the best judge of what I should do."

On the status of OPETH's next album:

Mikael: "I don't want to rush things. I want to make sure that the music that we have is fantastic. I don't want to [settle for] anything less than fantastic. Once we feel, 'Okay, this is a great, great album,' then we'll record it."

On whether OPETH plans to commemorate the upcoming 20h anniversaries of "Still Life" and "Blackwater Park":

Mikael: "I know that fans love those things, and our manager loves those things, because those shows are a good financial thing, to be honest. I'm going to be completely honest — I don't like those kind of things. We've done that stuff, and I'm not saying I disliked it, but I don't like the idea of going out and playing an album. I'm sure we're going to do it again, and if you go to one of those shows, you might look at me thinking, 'Maybe it looks like he doesn't like it,' and part of that is true, but once I'm up there, it's okay — it's always okay. But it feels a bit like a nostalgia act, and I want to be relevant. I want to play those old songs, but I don't only want to play old songs. I want to play from all the albums."

"Garden Of The Titans: Live At Red Rocks Amphitheatre" was released on November 2 via Moderbolaget Records / Nuclear Blast Entertainment.