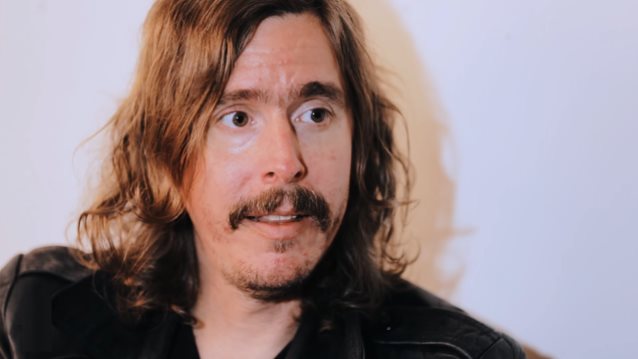 OPETH Frontman: 'We Don't Have To Be Anything Other Than Ourselves'

Exclaim!'s Aggressive Tendencies recently conducted an interview with vocalist/guitarist Mikael Åkerfeldt of Swedish progressive metallers OPETH. You can now watch the chat in four parts below. A couple of excerpts follow (transcribed by BLABBERMOUTH.NET).

Mikael: "For me, it's not as dramatic a difference as I think some of our fans of the earlier stuff would say it is, from the new records to the old ones. But, generally, I think what we sound like these days is… Many of the influences are the same as it was in the beginning: progressive rock, hard rock, the stuff that we grew up with, the SCORPIONS and DEEP PURPLE and [JUDAS] PRIEST]; those types of bands. But I think sonically there is a difference — how we record the records these days. I got really tired of the sterile, metal type of productions that we also had done before. They sound good, and it worked for those records, if you know what I mean, but I can't… it makes my ears just go tired. So we started with the 'Heritage' record [2011], especially, we started recording the records in a different way, trying to get more of a rootsy-type sound, which kind of meant that we turned down the distortion a little bit. We wanted to get the human come out a bit more — like, the player — which you don't really get from a wall of distortion. So the albums are produced in a different way. Musically, I think it's not that big a difference. It's a bit slower, I guess. The screams are gone, but I'm trying to kind of weigh that up with trying to explore my clean singing voice, so to speak, and we try to create dynamics in a different way."

On the songwriting process for this year's "Sorceress" album:

Mikael: "With the last three records, I wrote quickly. I mean, 'Heritage' was twenty days, 'Pale Communion' [2014] was two weeks, and the new one twelve days, I think. In one way, it doesn't feel like it; in another way, it feels like 'Sorceress' is our third record, if you know what I mean. I wouldn't say it's so much a new style, it's a new mindset that we have, that we don't have to be anything other than ourselves. And then it's debatable what people think we are. But from the core, I think we've earned the right to know best."

OPETH's twelfth album, "Sorceress", was released at the end of September.