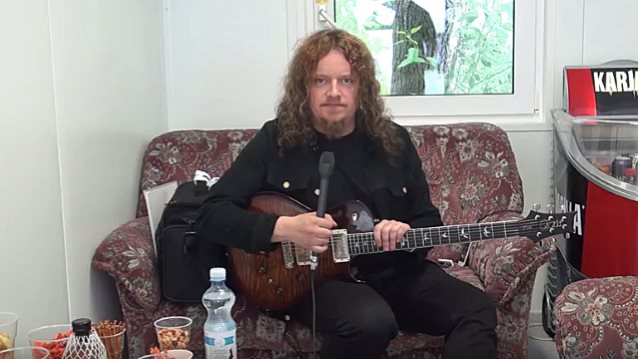 Metal Wani's Daniel Jaramillo recently conducted an interview with guitarist Fredrik Åkesson of Swedish progressive metallers OPETH. You can now listen to the chat below.

Asked if the change in OPETH's musical direction between 2008's "Watershed" and 2011's "Heritage" albums was deliberate or it happened in an organic way, Fredrik said: "I think it was a bit of both. I believe Mikael [Åkerfeldt, guitar/vocals], who is the pilot of the band and main songwriter, has always been like that. He felt during the 'Watershed' album that he kind of took the extreme metal thing to its peak, and that the band needed to do something different; otherwise it would stagnate, and maybe it wouldn't be around now anymore, actually."

He continued: "We're still metalheads; we listen to a lot of metal and we love heavy metal, and we love to play the old stuff as well. It's not that we shy away from it in some kind of stupid fancy way. If you go see us live, you definitely get your dose of that chunk of the band's history.

"Being that said, you don't know what's gonna happen in the future either. I always say that when we've done a new album. [Laughs]"

OPETH's twelfth album, "Sorceress", was released at the end of September.