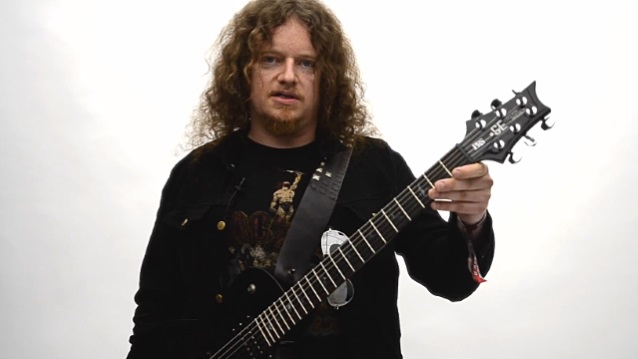 Radio Bocconi conducted an interview with guitarist Fredrik Åkesson of Swedish progressive metallers OPETH on November 3 in Milan, Italy. You can now listen to the chat in the YouTube clip below.

OPETH will celebrate its landmark 25th anniversary as a band next year with a very special event at the legendary London Palladium on October 18, 2015. After being the heaviest band to play the Royal Albert Hall in 2010, they will no doubt be the heaviest band to also play the Palladium. The unique show, dubbed "An Evening With OPETH", will feature two sets from the progressive Swedes, including 2005's much-lauded "Ghost Reveries" album in its entirety (which in turn is celebrating its 10th anniversary),plus a second set of classics from their 25-year career.

"Pale Communion" was released on August 26 via Roadrunner Records. The cover artwork was once again created by Travis Smith — with art direction by Mikael Åkerfeldt. The CD was produced by Åkerfeldt and mixed by longtime collaborator and PORCUPINE TREE frontman/guitarist Steven Wilson.