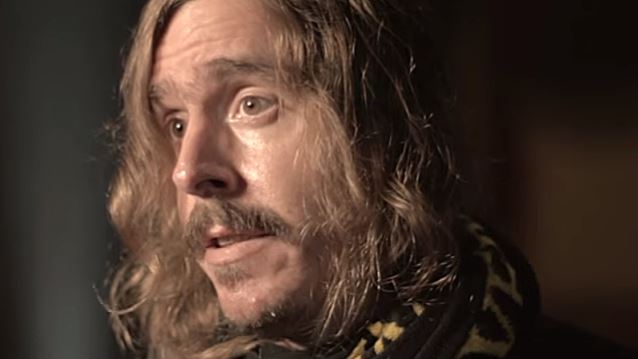 OPETH's MIKAEL ÅKERFELDT: 'In The Very True Sense Of The Word, We Are A Progressive Band'

Mikael Åkerfeldt (guitar, vocals) and Fredrik Åkesson (guitar) of Swedish progressive metallers OPETH are featured in the first episode of FreqsTV's original series "Into The Machine", an exploration of modern progressive music. Check it out below. A few excerpts follow (transcribed by BLABBERMOUTH.NET).

Mikael: "Genreless, it's a genre in itself, I think. The idea of progressive music is that it should be genreless.

"I think in the very true sense of the word, I think we are a progressive band. We take influences from all sorts of music. We don't try to fit into the whole progressive scene. I mean, we've been a band for twenty-five years this year. You change as a person; you know, your taste in music evolves."

Mikael: "We started out being a death metal band, and in the beginning, that's what we were. We were finding our feet within that scene, and, obviously, we were hungry, young, aspiring musicians who wanted to have a career in music and do what we love doing. And I still love our brand of death metal, if you will.

"That's what kept us within [the death metal] genre, I think, because we have that type of [growling] vocals. But, really, if you would have taken that vocals out of the equation, we wouldn't be a death metal band, really; we'd just be a metal band, or a progressive metal band, or something like that.

"By the time we did the very first record, I had personally moved away from consuming that type of music. I heard what was going on — like, I heard our peers, if you will — and I liked some of that stuff, too, but for my own influences, I was going back; I was listening to [music from] '70s, '60s. And not just rock music; I was going into singer-songwriter stuff, jazz. So I got interested in other forms of music through progressive rock, and with time, twenty-five years later, I don't really know what we are anymore, which makes us a progressive band. But everybody's got their own influences."

Mikael: "We go into a writing period, which usually means I sit in a basement, you could say, writing songs or parts… piecing together the songs. I have Fredrik come in to lay down some guitar solos and to… I want his opinion, what he thinks, you know. So I put together the record. I sequence the songs in the order I think is good for the record, and send out the demos to the guys in the band… Before I didn't do it [that way]; there was just fragments of riffs — a riff on a tape recorder, on an acoustic guitar, and that kind of became a song eventually. It's a method, basically, I use to get the guys psyched."

"[Martín] Méndez [bass] lives in Barcelona, so Axe [drummer Martin Axenrot] flew down there to rehearse, because the idea for the last two records has been to record the foundations live. So they're playing together with the whole band, so to speak. They're playing together with the demo guitars, demo vocals or keyboards. So they have the whole record when they're playing; they're just adding… We're changing those synthetic instruments from the demo into the real stuff."

On releasing full-length albums as opposed to individual songs:

Mikael: "We don't know anything else than the album format. The sequencing is very important to us, in what order we put the songs. I like to think [we make] V-shaped records — start on a high, so to speak, and take it down in the middle and then back up again in the end to create a dynamic within the record."

"When it comes to single songs, or songs released as a single, it's always a record-label decision. Whenever a single is coming out, we just see it as a promotion vehicle. It's not the best song, it's not the standout song or anything; it's just a taster. And it bothers me a lot if people would listen to the snippets on iTunes. 'I don't like that song. I don't like that song. That one I like. That's shit. And that's okay. So I'll just get those two songs.'"