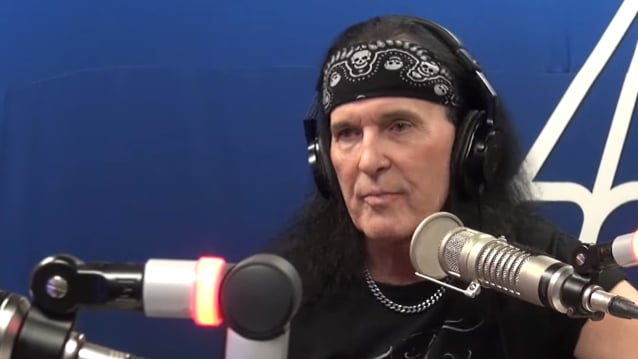 Original AC/DC singer Dave Evans says that he has "no interest in returning" to the band.

Earlier this month, Evans took to his Facebook page to shoot down rumors that he was hoping to come back to AC/DC, explaining that "the real essence of the band" died when founding rhythm guitarist Malcolm Young passed away in November 2017.

During an appeance on the Monterrey, Mexico radio station D99 - 98.9 FM, Evans talked about his plans for 2020. He said (see video below): "Next year is booked out already. I'm working more these days than ever before; it's incredible, this time of my career. But there's some exciting things, really. I've got a new album coming up early next year. I'm just finishing up my 'Lightning & Thunder' Latin American tour right now, and I've [played shows in] Argentina, Chile, Colombia, Panama — all over the joint — and I recorded some of it live. It should be released early next year. It's being mixed at the moment. But I could be — this is a whisper; I'm talking to some of the boys in my band here in Mexico; my Mexican BADASSES — but I could be recording an album in Mexico next year, of new [music]. That's news for you guys. We only just talked about it two nights ago, so this is brand new, hot off the press."

This past August, Evans said that he would consider writing a book about his time with the band if the "right publisher" approached him with an offer.

"A lot of people want the book," he told The Metal Voice. "That first 12 months of the band was incredible. So much happened in that 12 months. And I know a lot of fans want me to write a book about what happened, 'cause I'm the only one who can write it.

"If the right publisher approached me and wanted to give me an advance, I would write the story, and the fans would absolutely love that story," Dave continued. "It's a story that's never been told. And a lot of people should be mentioned, actually, in that first 12 months — a lot of important people. It's a great story. I'm part of that story."

Earlier this year, Dave told Wales Online that "a lot happened' during his time with AC/DC. "We had our first record, our first gigs, our first tour, three bass players, we played some of the biggest venues in Australia. It was an amazing time.

"We were always very ambitious. When you're young, you want to show the world what you've got. We were doing shows, but, basically, we weren't getting paid. The management had money but we were basically starving, so one night we'd had a few drinks and I said my piece and it all kicked off.

"I said, 'That's it, I quit.' I finished the rest of the tour and then we had a meeting where it was decided that I was out. I said 'fine' and that was that. I was no longer in AC/DC."

Evans told Wales Online that his former bandmates have not acknowledged his role in AC/DC's early history, saying, "They like to pretend in interviews that Bon Scott was there from the very beginning. The truth of the matter is that a lot went on before Bon became involved — in fact, the band had already got through two bass players, three drummers and a handful of managers by that point... all the stuff [Bon would] later do onstage with AC/DC, like taking off his shirt and carrying Angus around on his shoulders, was nicked off me."

Despite reported rumours I have no interest in returning to AC/DC as the vocalist. As far as I am concerned Malcolm...