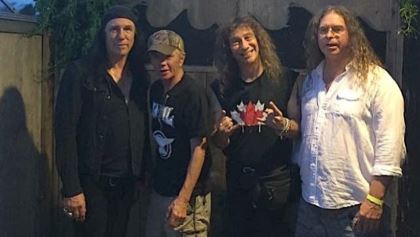 A photo of the reunion — taken by Drew Masters of M.E.A.T in Toronto — can be seen above.

In a 2013 interview with Myglobalmind, Reiner spoke about the possibility of ANVIL's original lineup coming back together to play a number of shows in celebration of the band's early albums. He said: "In recent years, we have been throwing the notion around of doing a world tour and calling it the '1, 2, 3 Tour'. Which really means that we would only play songs from the first three records, and having said that, there has been discussion of doing it with the original guys, but at this moment, it's unknown and undetermined if they are physically in the condition to weather the life of rock' n' roll for a tour. Regardless of their involvement, we still plan on doing this tour."

Kudlow and Reiner began performing together in the early 1970s and formed the original lineup of ANVIL in 1978. The band won a cult following with albums like "Metal On Metal" and influenced may of the current metal heavy hitters like METALLICA drummer Lars Ulrich and GUNS N' ROSES guitarist Slash. But ANVIL never hit the big time, although they received an unlikely late-career boost thanks to the movie "Anvil! The Story of Anvil", which documented the long struggle of Kudlow and Reiner to keep their group together and maintain a living long after their brief period of glory ended.

ANVIL is continuing to tour in support of its latest album, "Anvil Is Anvil", which came out on February 26 worldwide (excluding Japan) via SPV/Steamhammer.

Reunion of the year? Of the century? For the first time in 27 YEARS the original 4 are hanging together!! ANVIL !! pic.twitter.com/mWACORoOWa