Stalker: What band were you in prior to the formation of JUDAS PRIEST?

Atkins: Late 1968, I was in a band I named THE CHAPTERS OF LIFE, but our agency thought the name was too long and retitled us JUG, and has they were supplying us with our gigs I didn't object. One night at a gig we were playing with SPOOKY TOOTH and SLADE, I was approached by another band named EVOLUTION who were managed by BLACK SABBATH's manager Jim Simpson, and they asked me to go on a three-month tour to Morrocco, which appealed to me, and so I left JUG. Not long after joining up with them, Jim Simpson told me apart from singing in EVOLUTION I also had to drive their tour bus, so I told him to stick it, "I'm a singer not a fucking roadie," I told him. By then my old band had split up, so I formed another one with some members that I had played with before, like John Perry (guitar) Bruno Stapenhill (bass) and John Partridge (drums). This was the beginning of JUDAS PRIEST.

Stalker: When did JUDAS PRIEST form? How long were you with the band?

Atkins: JUDAS PRIEST formed in 1969. It didn't get off to a very good start because John Perry (aged 18) commited suicide. We auditioned for another guitarist, and one young guy who came along was K.K Downing or Kenny, as we new him by then but he lacked experience and didn't get the job. It went to a lad name Ernie Chataway. We toured the UK and did some recording demos of some of my songs and landed a three-year contract with Immediate Records in London, but not long after signing the contract they went bust. We eventually split up and I formed JUDAS PRIEST MK2 in 1970 with a bit more experienced by now KK (guitar) and Ian Hill (bass),on drums was John Ellis. After touring up and down the motorways and opening up for bands like BUDGIE, STATUS QUO, BLACK SABBATH and THIN LIZZY to name just a few and going through three drummer changes, which was Alan Moore and Chris Campbell, I eventually left them in May 1973 and was replaced by Rob Halford.

Stalker: Essentially you were the dominant force behind the classic album "Rocka Rolla". What were your ideas for the recording of these classic tracks?

Atkins: I was the main writer in the band and some of the songs like "Winter" came about from touring Scotland in the freezing winter of '70 and getting stuck in a snow storm at night on a mountain and having to be dug out the following morning. "Caviar and Meths" was our big finishing 10-minute finale when we played live and was just about two peoples different lives, one had all the luck and money, the other had a hard life with none. PRIEST cut it short on "Rocka Rolla" but I don't know why. I recorded the full version on my "Heavy Thoughts" solo album. "Never Satisfied" is just about our ever-changing lives. I wrote this in '72 and Rob recorded it live at the Crucible a few years ago. It was also covered by L.A. band ARMORED SAINT but I haven't heard their version. K.K. was writing his first ever song when I left them in '73 called "Run of The Mill". On "Sad Wings of Destiny" was two more of mine "Dreamer Deceiver" and "Victim of Changes". "Victim" was made up of two songs, mine was "Whiskey Woman" and Rob's was "Red Light Lady" which the band joined together and retitled it and it is now an all-time classic.

Stalker: Did you like the cover versions of your songs by STEEL PROPHET and ARMORED SAINT and others?

Atkins: Yes they were brilliant covers of my old songs that JUDAS PRIEST had made famous over the years.

Read the entire interview at Stalker.

Al Atkins recently completed work on his autobiography, titled "Dawn of the Metal Gods: My Life in Judas Priest and Heavy Metal". The book, which was was written with Neil Daniels a freelance rock writer and heavy metal fan who befriended Atkins during the writing of Neil's book "The Story of Judas Priest: Defenders of the Faith" (Omnibus Press) will tentatively be released before Christmas via Iron Pages. 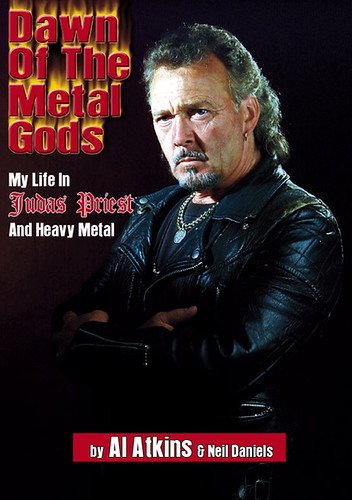