According to Random Chatter Music, the original lineup of the acclaimed American hard rock supergroup MR. BIG, which disbanded in 2002, will celebrate the 20th anniversary of the release of its debut album by reforming for a tour of Japan. Eric Martin (vocals), Billy Sheehan (bass), Paul Gilbert (guitar) and Pat Torpey (drums) confirmed their reunion plans to DJ Koh Sakai of the Japanese radio program "Heavy Metal Syndicate". Gilbert reportedly said in a pre-recorded message, "MR. BIG is back together, all original members, and we're coming to Japan to play live. So, come check it out, and rock with us. Yeah!"

Paul Gilbert left the band in 1997 to pursue a solo career and eventually reform RACER X. Richie Kotzen, another Shrapnel artist and former guitarist for POISON, was brought in to take on guitar duties, also contributing occasional vocals. Two studio albums were released by this lineup — "Get Over It" in 2000 and "Actual Size" in 2001, which featured the single "Shine", used as the ending theme in the animation series of "Hellsing". 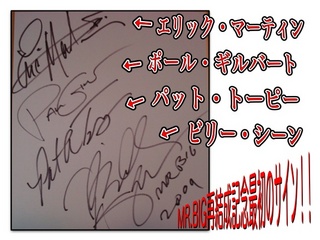