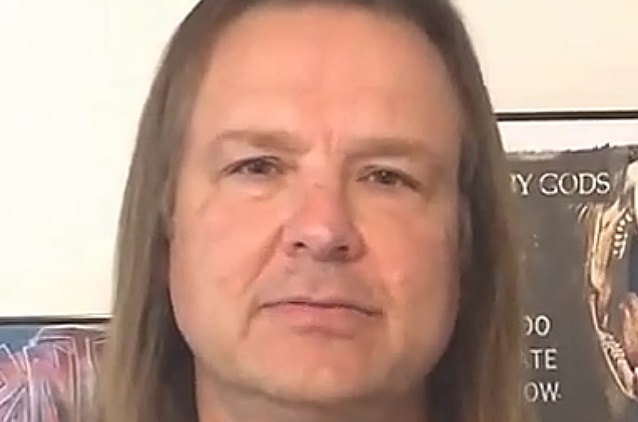 Former PANTERA singer Terrence Lee "Terry" Glaze says that he was surprised by how negatively Vinnie Paul Abbott was portrayed in Rex Brown's book, explaining that "if anybody deserves a break," it is the ex-PANTERA drummer.

Glaze was the frontman of PANTERA during the band's early'-'80s "party metal" phase and sang on the group's first three albums. After leaving PANTERA, Glaze formed the band LORD TRACY.

Noting that he "roomed with Vince the whole time" he was in PANTERA, Glaze told the "Full In Bloom"podcast that he "just couldn't believe how harsh Rex was on Vinnie" in his 2013 memoir, "Official Truth, 101 Proof: The Inside Story Of Pantera". "I mean, it was just a family-type thing, and all the history they'd been together, I just couldn't imagine doing that," Terry said (hear audio below). "Even if you felt that way, I couldn't imagine doing it out in public."

Glaze said that the last time he saw Vinnie was when he attended "Dimebag" Darrell Abbott's funeral in December 2004, just days after the PANTERA guitarist was killed while performing with DAMAGEPLAN at the Alrosa Villa in Columbus, Ohio, Dimebag, who was Vinnie's brother, was shot onstage by Nathan Gale. He was 38 years old.

"I saw Vince at Darrell's funeral, and all I know is I can't imagine what Vince has to go through every single day when he wakes up, and I don't ever wanna know," Terry said. "If anybody deserves a break, I would think it'd be Vince."

Asked if Rex wrote any of the PANTERA music while Terry was in the band, the singer said, "Not that I remember."

According to Glaze, the relationships between the PANTERA members were relatively normal while he was in the band. "I don't think anybody was difficult when there was no money involved and we were just doing it 'cause we loved it; everybody was pretty easy," he said. "I can't imagine how hard it might have been once finances got involved. That's usually where the difficult part comes in — probably when they started getting really big. That would be my guess."

Glaze added that he felt a special kinship with former PANTERA singer Philip Anselmo, who joined the band in 1987 and pushed the group in a heavier direction. "Phil and me understood the other three like nobody else," he said. "I was a big fan of Phil, too, on those [later PANTERA] records; I thought he was amazing. My favorite PANTERA record is 'Vulgar Display [Of Power]'."

Terry also denied that musical differences ultimately led to his exit from PANTERA. "The reason I left is because the four of us, plus Vince and Darrell's father, we all voted, and the Abbotts, the three of them, never split their vote, and so it didn't matter what I wanted to do; the Abbotts made all the decisions," he explained. "And eventually I just thought, 'I don't like what's going on.' So that's why I left.

"I loved playing in that band, and we were good," Glaze said. "It wasn't the two hours on stage, it was the other 22 hours of the day where we wanted to kill each other. Which is typical for [young] artists. The music was… I loved the music; I had no problem [with the music]. It was just getting along when we weren't on stage."

Glaze said that things got very tense between him and the other members of PANTERA right before his departure from the group. "I gave 'em [two weeks] notice [before I left], and that was not good. Because as the last couple of dates came up, I guess I was hoping that we would work it out, but they were not interested in working it out. And as it got closer and closer to my last day, it became colder and colder. So the last gig was Wichita Falls, and it got done, and I loaded my truck and freaking left. It was really weird. I thought, 'Man.' I guess I thought we would all come together and try and work it out, but that's not the way we went down."

Back in April 2010, Glaze rejoined Brown on stage in at the debut gig from Rex's then-project ARMS OF THE SUN in Dallas, Texas. They performed a couple of early PANTERA songs — "Come-On Eyes" from 1985's "I Am The Night" and "All Over Tonite" from 1984's "Projects In The Jungle".

In some recent interviews, Brown was publicly critical of the way his autobiography turned out, saying that the book's publication is partly to blame for the deterioration of his relationship with Vinnie Paul. "There was a bunch of shit in my book that was not supposed to be in that book, and I went through ten different edits and they put it in there anyway, and it left a fucking bit of sour in some people's mouths," Rex told the "Trunk Nation" radio show.

Image courtesy of This Day In Metal and TerryGlaze.com