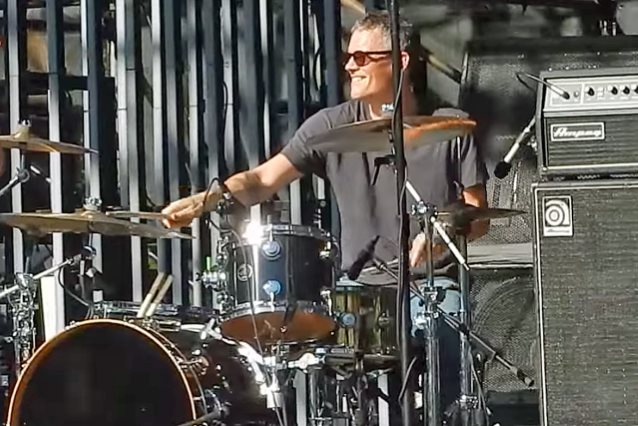 Original PEARL JAM drummer Dave Krusen has spoken out about the controversy surrounding the band's upcoming induction into the Rock And Roll Hall Of Fame. In an interview with Rolling Stone, Krusen — one of two PEARL JAM drummers out of five who are going in — said the induction was "very exciting" and that he would attend the ceremony. When asked about whether any of the other drummer should go in as well, Krusen said: "I'm staying out of that."

Krusen, a recovering alcoholic, added: "Having been in that band, when you leave you are still representing them. That was a big part of how I got myself together. I felt like just because I'm not in that band, I'm still out there and people are like, 'Oh, you played in that band?' You're like an ambassador and you better keep your shit together... The whole drummer controversy with the band, obviously Matt Cameron should be there. Beyond that, I guess I'll just stay out of it."

According to The Pulse Of Radio, Krusen played in PEARL JAM during its formative months and left shortly after the recording of its 1991 debut album "Ten". Cameron, the other drummer being inducted, has been with the group since 1998.

But between Krusen and Cameron, Matt Chamberlain, Dave Abbruzzese and Jack Irons all did stints with the group. Abbruzzese, who recorded and toured the "Vs." and "Vitalogy" albums with the band — their peak years — has expressed his displeasure with the situation online, saying: "The qualifications required for me to have been inducted with my former bandmates certainly have been met. I challenge anyone to justify why I am not worthy of a place in the history of PEARL JAM."

PEARL JAM guitarist Mike McCready told The Pulse Of Radio last week that the choice was not the band's but the Hall Of Fame's.

Meanwhile, Krusen was asked if he would be up for jamming with his former bandmates at the Hall Of Fame ceremony in April. He replied: "I think the fans would dig that. I'd love to do it … I don't think it is likely, but I'm down."