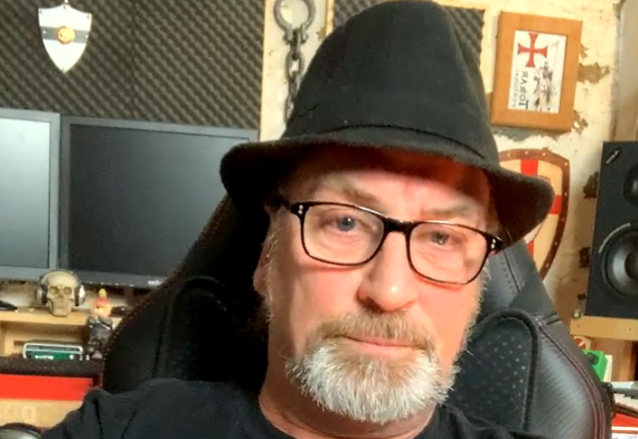 Former VENOM and current VENOM INC. guitarist Jeff "Mantas" Dunn says that he would love to reunite the classic VENOM lineup to celebrate the 40th anniversary of the band's "Black Metal" album.

Dunn touched upon the possibility of a classic VENOM reunion during a Facebook Live chat on Monday (February 28). He said (as transcribed by BLABBERMOUTH.NET): "I'll never retract anything I've said, because I'm sorry but it's true. Regardless of what him or him thinks, it's true; it's just as simple as that. I'm not gonna go out there and blatantly talk a lot of bollocks like one of us did. What I've said is absolutely true, and I've put it in print — into the book as well. It's there. It's absolutely true. But we're at that age now — I'm 60; Bray's, like, 61; Conrad's what — 58, 59? We've just been through a massive fucking pandemic where nobody's done anything. We've got fucking a war in Europe at the minute. [All the issues we've had with each other], it fucking pales into insignificance; it's fucking bollocks.

"When I did the interviews for the 40th anniversary of 'Welcome To Hell' — there's another anniversary we fucking missed; nothing done about it; it just passed," Dunn added. "But the thing was, I got these interviews in, and people were saying to me, 'You just don't realize the importance of what you did.' I don't, because I suppose we were so close to it. I've said it a million times — I was just a fucking kid writing tunes in my fucking bedroom living with my mom, and I was lucky; people fucking dig them.

Addressing the fact that VENOM INC. will commemorate "Black Metal"'s 40th anniversary by performing it in its entirety on October 2 at the Keep It True festival at Posthalle in Würzburg, Germany, Dunn said: "When the Keep It True thing came along, I thought, 'Yes! Yes! I'm gonna fucking do it.' Because no one fucking else is. Nobody else is gonna go out there and celebrate this fucking album — monumental fucking album. It should be fucking celebrated."