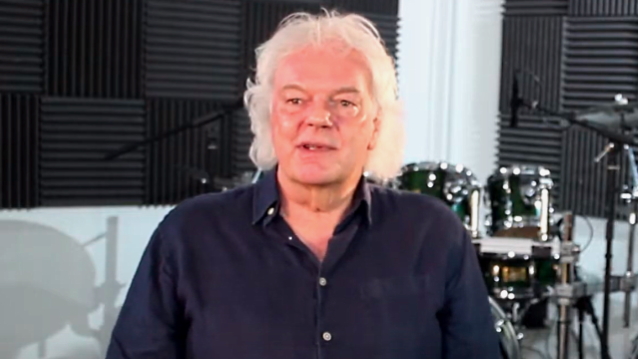 Neil Murray, a founding member of WHITESNAKE who played bass on one of the best-selling hard rock albums of all time, the band's self-titled 1987 effort, was asked in a new interview with Rolling Stone when the last time was that he spoke to WHITESNAKE leader David Coverdale. He responded: "Probably a few months ago. I didn't speak to him for many, many years. I went to see WHITESNAKE a few times when I wasn't in the band. and he'd even say onstage, 'Oh, I hear Neil Murray is in the audience. I hope he's going to come backstage afterwards.' And I wouldn't do that simply because there would be such a difference between their level of success and what I was doing at the time, which would be virtually nothing or something very obscure. I'd just be very uncomfortable.

"But we've had a few conversations," he continued. "We aren't really on the same wavelength anymore, I'd say. He's lived in America since 1985. He's been married to two different American women. The whole success in terms of the post-1987–and-onwards career has been so focused on that style of music. Even though he has great affection and nostalgia for the earlier albums, he doesn't ever try to play that style of rock anymore.

"I don't know. If someone is a multi-millionaire, and I'm the opposite, no matter who they are, whether you know them or worked with them or whatever, there's such a huge gulf between your lifestyles that it's kind of hard to get on the same page.

"I get on fine with him, but it's very much on his terms," Neil added. "If you read interviews with him, you don't really get to the heart of David. It's very much, 'Here's the same quotes and stories I've told everybody else.' I don't know him well enough now to get beyond that. He's had more contact with Bernie [Marsden, original WHITESNAKE guitarist] over the year the years because of the huge success of 'Here I Go Again'. It keeps getting reused for movies and adverts and whatever. They've both done extremely well out of that song.

"The thing is, if that song sells a few more WHITESNAKE albums and I'm going to make a little bit of money from it, that's great. But I haven't been with any bands where I've really had the sort of payday that some of the guys in the band have had. It's partly just timing. I was with [BLACK] SABBATH where nobody was particularly interested.

Murray initially shot to fame in the late 1970s and 1980s with WHITESNAKE, where he contributed to hits such as the aforementioned "Here I Go Again", "Fool For Your Loving" and "Still Of The Night". Since that time, he has worked with a number of highly successful recording artists, including BLACK SABBATH, Gary Moore, Brian May and Michael Schenker, to mention a few.