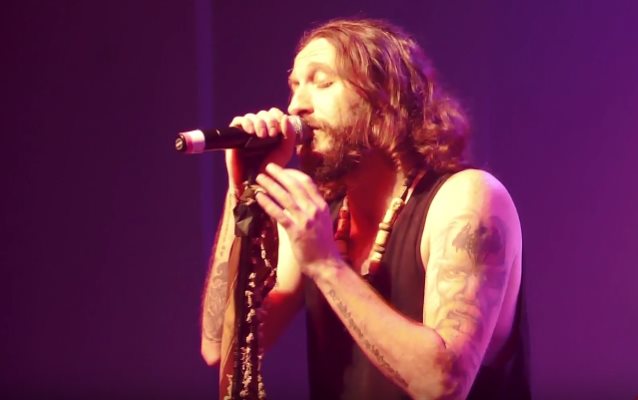 ORPHANED LAND's KOBI FARHI: 'We Always Blame Religion Or Politicians, But It's The People Who Do Not Change'

Alexiel Divine of The Offering webzine recently conducted an interview with frontman Kobi Farhi of Israeli progressive folk metal masters ORPHANED LAND. You can listen to the entire chat below. A few excerpts follow (transcribed by BLABBERMOUTH.NET).

Kobi: "This is a protest album, a very angry album that is based on the 'Allegory Of The Cave', which is something that was written by the Greek ancient philosopher Plato. He wrote this allegory as a story about the human behavior because the ancient Greeks, they killed the philosopher Socrates and Plato couldn't understand how they could kill such a guy who was a gift to humanity, how could they kill someone with the knowledge and wisdom. Then he figured out something about humanity's behavior, that they are living in a cave and they see shadows in the cave and these shadows are the only truths that they know and they don't want to leave the cave and anyone who will try to take them out of the cave, they will kill him. We took this an allegory of today's life. Every time that you see a revolutionary guy that came to humanity and tried to release them from the darkness, humanity has chosen to kill him. It could be Mahatma Gandhi for Indian people, or Martin Luther King [Jr. ] for Afro-Americans, or Che Guevara for South Americans and there are many, many more examples of revolutionary people being killed. We thought Plato is an ancient prophet in a way. He wrote this thing two-thousand five hundred years ago; this is like a prophecy. Those people who are revolutionaries, leaders, they are always ending up dead. They are like the dead messiahs in a way. This is a mirror to humanity to show them that we always blame religion or politicians, but it's the people who do not change. It's the people who prefer to stay in the darkness. This is a concept album and a very big protest that we have about it."

On the importance of delivering their message through music:

Kobi: "It's very important because I think that music is a great weapon to use to transform your messages. Music has the ability to touch people and make people think and we always use the music as a weapon, as a positive weapon to make people think, to give them hope. I think music is one of the greatest gifts to humanity."

On whether ORPHANED LAND approached the songwriting to "Unsung Prophets & Dead Messiahs" differently than 2013's "All Is One":

Kobi: "Not really. I think this album is like a combination of our three last albums. If you take [2004's] 'Mabool [The Story Of The Three Sons Of Seven]' and if you take [2010's] '[The Never Ending Way Of] ORwarriOR', these albums, they were concept albums. In the last album, 'All Is One', we did a more straightforward album. I think that the new album is a combination of these three because we are back doing a concept album, but we took the sound and production and orchestration and epicness from the last albums. In some kind of a way, it's a combination of the last three albums from ORPHANED LAND and I think it created a very strong result."

On the evolution of ORPHANED LAND's musical style:

Kobi: "We are always evolving and we are always becoming better. I'm a better singer. With every album, my singing is better and better. With every album, we keep on evolving. This is a great feeling because we have been doing music for 26 years and to feel that you are doing your best, this is a great feeling, so we are evolving all the time and we are finding deeper concepts and my singing is higher today and everything is really evolving all the time. It's very good that it's still happening. If we would not evolve, I would feel that we would need to finish the band."

On how ORPHANED LAND came up with the idea to have former GENESIS guitarist Steve Hackett, AT THE GATES vocalist Tomas Lindberg and BLIND GUARDIAN vocalist Hansi Kürsch guest on "Unsung Prophets & Dead Messiahs":

Kobi: "With Hansi Kürsch from BLIND GUARDIAN, we became very good friends when we played together on a tour. I asked him to sing on our album in the song 'Like Orpheus', because Orpheus, in Greek mythology, he was a great singer. I thought that Hansi's a modern Orpheus. I'm happy that he agreed to do it and he did an amazing job. With Tomas Lindberg from AT THE GATES, we needed someone to be very crazy. In the last song, when they killed the hero, we needed someone with a crazy voice, like a lunatic, like insane. And Tomas Lindberg is one of the best growling singers in the metal scene. I am a big fan of AT THE GATES and also BLIND GUARDIAN, so I'm very happy to have these two diverse singers on our album. Also with Steve Hackett from GENESIS, he played a solo on the album. It was because he was asking me to sing on his album. Of course, I agreed. I'm a big fan of GENESIS and Steve. Then he asked me if I preferred to get paid or if I wanted him to play a solo on our album, so, of course, I said I wanted a guitar solo."