Russia's Darkside e-zine has uploaded quality photos of OVER THE RAINBOW's February 16, 2009 concert at BKZ Octyabrsky in Saint-Petersburg, Russia.

OVER THE RAINBOW is:

Jürgen Blackmore is a critically acclaimed guitarist in his own right and agreed to join this endeavor after realizing how intense the demand was for a RAINBOW "reunion." OVER THE RAINBOW marks the first time that four members from three different eras of RAINBOW have taken the stage together along with J.R. Blackmore.

antiMusic's Morley Seaver recently spoke with Joe Lynn Turner about OVER THE RAINBOW. An excerpt from the conversation follows below.

antiMusic: How did this RAINBOW reunion of sorts come about?

Joe: Well, I'll tell you, quite honestly, I was sitting in Russia after a tour with a few promoters and what not and they were like, "You know, it would be great to have a RAINBOW reunion. Huh? Do you think that'll ever happen?" I went, "Well, you know, you're not going to get Ritchie, you know what I mean? He's really happy doing what he's doing and so on." And so they said, "Well who would you get?" And I said, "It wouldn't work." And they said, "Well, it's got to work." And I said, "Well, you know, it's not a matter of all the other guys. It's the guitarist." So then it hit me. And I swear, all of a sudden they went, "What, What?" And I said, "I think I have an idea." And they said, "What is it?" and I said, "Blackmore's got a son." And they went, "You're kidding. Really?" Nobody knows that. Not many anyway. You know, because he's German, half German. And his name is Jürgen Richard Blackmore. And he's been playing guitar for like 30 years, and he's great. So I was in Germany, and I started to get this bug about it, and I called Jürgen and said, "Look, can we meet for dinner?" Because I knew him when he was like 16, 17 and he would come to the shows and what have you. He was a kid and I'd probably be like his big brother or something you know, Anyway, I called and we had dinner and he loved the idea. So I said, now once I got Jürgen in place here, I got Blackmore on guitar, now I can start lining up the other guys, and of course I wanted to try to represent the incarnations of RAINBOW as best we could. I'm not going to get into any names in particular but we certainly don't want any people who are using drugs or abusing alcohol to a GREAT degree…you know what I mean by that. (laughs) Okay if you want to have a few drinks, but you can't be drunk and stand around all the time. And that eliminated quite a few people. (laughs)

Joe: And they shall remain nameless to protect their identities. But anyway we got a great lineup; we've got Jürgen on guitar, Bobby Rondinelli on the drum spot, who's just phenomenal. We've got Tony Carey on keyboards. Tony had great success with PLANET P as well. And, of course, on bass now from the very last incarnation of RAINBOW, and a member of the Joe Lynn Turner band is Greg Smith. So we've got friends and family and actually we call this a family project. That's how we refer to it in emails. It's really strange because we've all known each other for over 25 years. Now, we're getting the set list together.

Joe: Yeah, so it's all like "Hey man, this is going to be great to play together." And we've dropped the news on everybody and the reaction is just amazing. Now we've got to live up to it.

antiMusic: No problem there. Have you ever played with J.R. before?

Joe: Not lately. There was one point in time we were hanging out and jamming a little bit. But that was when he was still very young and he's since improved a lot. So I did keep up with his MySpace and even before that, a few of the sites that he'd download stuff onto with his projects. And you know, he really had a great tone and he had a great sense of melody and now he's even got chops, so you know it's kind of like I said "You can cut your father's stuff, you know. Are you worried about this? Do you feel that there's an intimidation factor here or anything? And he said: "No, as long as I'm allowed to you know, edify my father's leads. My father's never been a fast player." And I said, "No, but he's accurate though." and he said: "I can do exactly what he does but I'm more of a tone and a feel player." And I go, "Well, some of my favorite guitar players like Leslie West and people like that are just that way." So I think this thing's going to work. But we were all like that in the beginning. We've all never played each other. So will this work? But we're all good at what we do so how can it not work? You know, that's how you start a band: you just call up your buddies and go "Come to my basement. We'll practice."

Read the entire interview at www.antimusic.com.

Photo below courtesy of Darkside 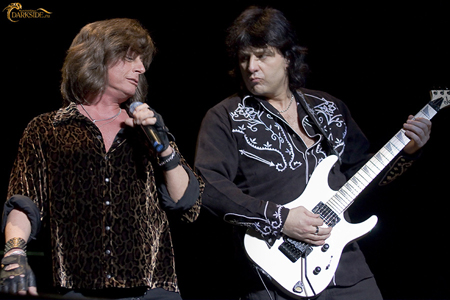