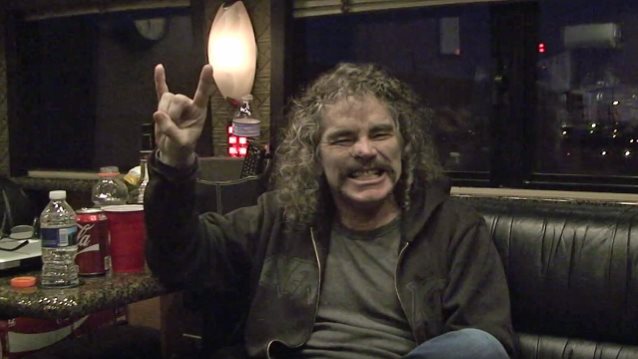 Even though Ron Lipnicki has been part of OVERKILL's lineup for more than a decade now, the drummer has been absent from the band's last few tours, with OVERKILL's longtime drum tech, Eddy Garcia, stepping in to take his place.

In a brand new interview with HardrockHaven.net, OVERKILL singer Bobby "Blitz" Ellsworth explained how the drummer switch came about. He said (see video below): "Eddy's been part of our team since Ron's been part of our team, since 2005. He came on very soon thereafter. He was our sound guy. He played for a band called PISSING RAZORS. We had an issue with Ron. He'd broken his wrist, I think it was back in '12. And we were scheduled to do 70000 Tons Of Metal, two shows. We really like Andy [Piller], who puts it together — he's a friend of ours — so we said, 'Hey, here's our situation. We're gonna slide Eddy in.' So Eddy has played with us in the past, filled in for Ron. So when Ron just didn't wanna tour anymore, or just couldn't tour anymore — it seems to be a personal issue that he has — Eddy just was the slide-in. Just, you know, move over… It's kind of cool that he's already part of the team and you know him personally… We know him personally and we know what to expect from what he brings to each day. So he's a good choice for us to have, and we're lucky to have him as part of this team."