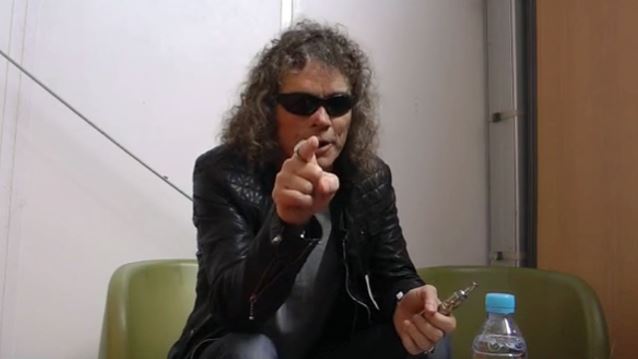 United Rock Nations conducted an interview with vocalist Bobby "Blitz" Ellsworth of New Jersey thrash metal veterans OVERKILL on June 17 at Hellfest in Clisson, France. You can now watch the chat below. A couple of excerpts follow (transcribed by BLABBERMOUTH.NET).

Blitz: "When you're talking about longevity and looking into the future, I think that that's one of the hardest things to ever project for somebody. I think the idea is about this was always supposed to be a passing moment. But I think we've put a lot of time into a lot of things, and being able to do the most you can with each moment gives you the opportunity to put moments together, and I think that what happens after those moments are together is that you get a huge, heavyweighted, long career. And this has been a good opportunity for us of stringing those moments together. So I never could have, as a kid, thought that this would have happened. I think that, as a kid, I was just happy to have that one record, I was happy to have that one tour. But then you start getting addicted to it. So you're putting as much into those first moments as you're putting into the moments of the present day."

Blitz: "The new album will be out before the end of '16. We're holding the title back for a little while longer so we can release it simultaneously throughout the world. Not that it's gonna make or break the world or change any politics or anything or change the music business, but it's the way we feel about it. And I'm very proud of the fact that we run this business. These are not decisions that are made by [our record label] Nuclear Blast; these are always decisions that are made by us. And I think that it's important element in the fact that being a band that has self-management in it — myself and my partner [bassist D.D. Verni], and we have a third partner — but we can put our hands on that stuff, [and] we can plan our lives. We can [be in a] partnership with other people, but we plan our lives. So with this record, we've planned the time, we've planned the release, we've planned the title, we've planned the artwork. So that'll be out before the end of '16. The drums, the guitars are done. The bass is happening. I'm gonna start doing vocals when we get home. It's gonna have the stamp of OVERKILL across its forehead, as normal."

On what inspires him to keep making new music:

Blitz: "You know, whatever inspires me to do it, it's first and foremost the opportunity. I think it's something about the way we were brought up. Coming from the state of New Jersey, there's a certain element of work ethic in it. And what inspires us is opportunity and being able to take that opportunity and make the most out of it. I'm not saying that Jersey is the only one common to this type of a principle or value, but I do say that I know that value as being that of my neighbors, my friends, people I don't know. That area is always moving, it's always working, it's always grabbing new opportunities, so I think that that's one of the great things — to be able to grab these opportunities and still feel, this many years later, that it's not real work, that it's something that's just a great fucking experience to be part of. And if you take that from day to day, man, you're gonna get good fucking results."