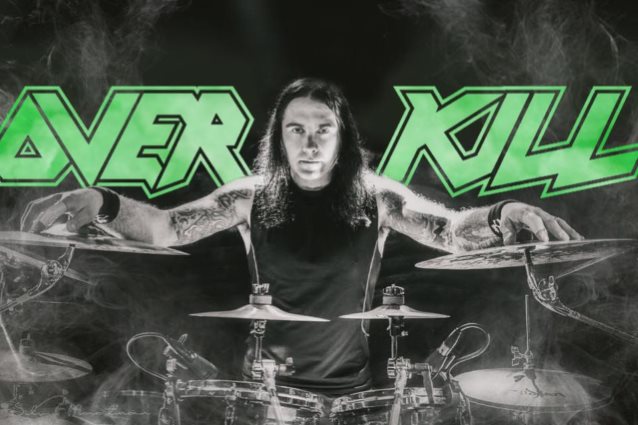 Even though Ron Lipnicki had been part of OVERKILL's lineup for more than a decade, the drummer was absent from the band's last few tours, with OVERKILL's longtime drum tech, Eddy Garcia, stepping in to take his place.

"OVERKILL would like to announce its newest member, behind the kit and steering the ship, Jason 'Sticks' Bittner," comments OVERKILL frontman Bobby "Blitz" Ellsworth. "We wholeheartedly would like to thank Eddy 'The Mexicutioner' Garcia for holding down the ship and keeping the momentum up for the band over this past year plus. Eddy has, and always will be, part of the OVERKILL machine.

"Jason is a long time friend of the band and his abilities have always spoke for themselves. Let the touring continue... onward-upward!"

Bittner states, "When my phone rang about two months ago and Blitz said 'Hey, me and D.D. [Verni, OVERKILL bassist] are wondering if you would be interested in joining?' It really didn't take much for me to write back a one-word answer.... ABSOLUTELY! I am extremely excited to be a part, once again, of thrash metal history, and I cannot wait to get out on the road and wreck stages across the world with the 'Mean Green Killing Machine!'"

In a recent interview with HardrockHaven.net, Ellsworth spoke about Garcia's involvement with OVERKILL. He said: "Eddy's been part of our team since Ron's been part of our team, since 2005. He came on very soon thereafter. He was our sound guy. He played for a band called PISSING RAZORS. We had an issue with Ron. He'd broken his wrist, I think it was back in '12. And we were scheduled to do 70000 Tons Of Metal, two shows. We really like Andy [Piller], who puts it together — he's a friend of ours — so we said, 'Hey, here's our situation. We're gonna slide Eddy in.' So Eddy has played with us in the past, filled in for Ron. So when Ron just didn't wanna tour anymore, or just couldn't tour anymore — it seems to be a personal issue that he has — Eddy just was the slide-in. Just, you know, move over… It's kind of cool that he's already part of the team and you know him personally… We know him personally and we know what to expect from what he brings to each day. So he's a good choice for us to have, and we're lucky to have him as part of this team."