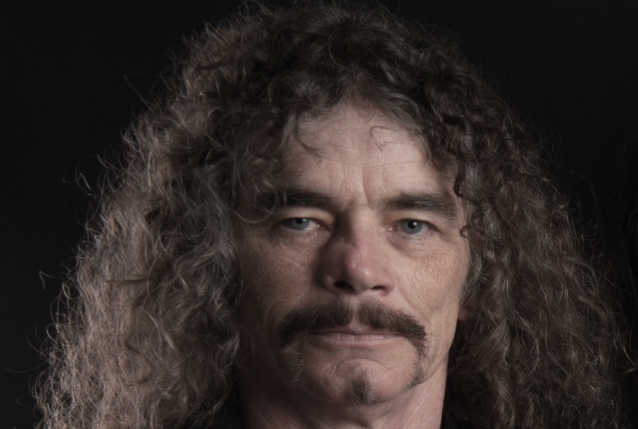 On OVERKILL following its own instincts without outside management:

Bobby: "I always know OVERKILL is making our own decisions. We've been self-managed since the mid-'90s. We had great management prior to that while we were learning and maybe during that learning period, our management got the messages of intent from the record companies saying 'Hey, can the guys do this?' I think our management was smart enough to realize that what made the band good was that we were wild horses. We were not in it for the popularity, but in it to be in it, which makes a total difference. But, for sure, in the current era, there's a lot more attitude."

On thrash reaching the mainstream by the time of their sophomore 1987 album, "Taking Over":

On the thrash scene going up against the parade of power ballads that ruled the charts in the 1980s:

Bobby: "I think genres reflect the individual bands in the genre reflect other bands in the genre. I think the beauty about thrash was that we really had less of a template to reflect off other bands. But, I think you're right: the power ballad became something special for that softer version of metal. Listen, not a POISON fan at all, but for sure a CINDERELLA fan. They reminded me of THE ROLLING STONES, at least half of their stuff. I always liked hearing that. I was much more attracted to KREATOR's 'Pleasure To Kill' or 'South Of Heaven' by SLAYER, who were doing the stuff we were doing at the time."

On how OVERKILL has grown from album to album:

Bobby: "If you start worrying about the future, you've disrespected the past. [Laughs] I'm fine in the current day and for me, again, just press play. This record ['The Wings Of War'] is made by five guys who like what they do. I think that's the most important thing. We were never in this for the accolades. We were never in this, except we could have ended up in worst places than here, or we could have ended up more successful, it doesn't matter. The point is, is this is who we are. The idea is to do it whole-heartedly. It's an opportunity; squeeze it for what it's worth and you'll get good results."

On the changes in how people listen to music:

Bobby: "I don't really think about it. The point is, is that you have to reinvent yourself yearly as quick as the technology changes. If you don't, I'd giving you an answer for instance, 'Let me tell you something…when I was a young man.' [Laughs] Which makes no goddamn sense. It is what it is. Do I like it? I hate it. I like shaking hands. I like talking sports. I love playing heavy metal. I fucking love playing heavy metal. I'll do it any way I can. If that means — I love this and this is [bassist] D.D. Verni's quote — 'the' Facebook, 'the' Twitter. It sounds like your grandfather telling you: 'Do you have a Twitter, kids?' I don't have personal accounts for myself, but we realized if we didn't embrace the changes, we'd be put in a position to be left behind and that was not in the cards and not a possibility. Sure, we come from the old school. We may be some of the last cowboys, but the other side of it is, I'd rather shake hands, but sure as fuck, you're going to know we're out there on the Twitter, the Facebook and the Internet."

OVERKILL's nineteenth studio album, "The Wings Of War" was released on February 22 via Nuclear Blast.