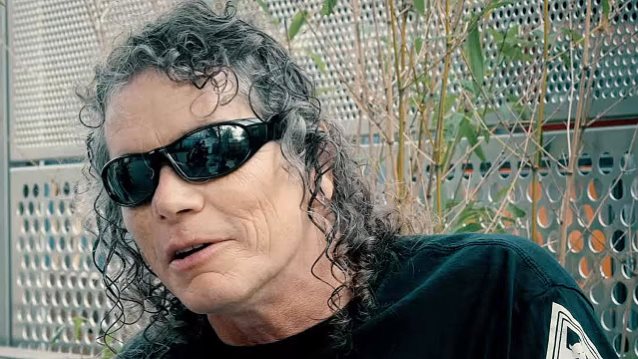 TV Rock Live conducted an interview with vocalist Bobby "Blitz" Ellsworth of New Jersey thrash metal veterans OVERKILL on April 3 in Paris, France. You can now watch the chat below. A couple of excerpts follow (transcribed by BLABBERMOUTH.NET).

On his relationship with OVERKILL bassist D.D. Verni:

Blitz: "I send him flowers on his birthday. [Laughs] I think, again, simplicity… We have a lot of the same values. I remember talking one day with his wife, who I've known as long as D.D., and she said, 'You know, it's because you come from the same place. You were brought up with a mom and dad, brothers and sisters and the same values, so you identify with each other on another level. You don't have to talk about it; you already know what the other guys is thinking.' If you put the man before the band… If he says, 'Blitz, whatever you need. If you're in trouble, I'm here to help,' it's not about the band then; then it's about the guy. D.D. and I also manage the band, so when you have someone who's taking opportunity with regard to the day and you have someone who's planning down the road, you get the best of both, because you can explode in the moment, but plan to explode in the future. So I'm more about not looking down the road, and I wouldn't change that principle in this answer. [Laughs]"

On the importance of having a strong team around a band:

Blitz: "One of the things you don't want is you don't want the day-to-day pain in the ass of egos clashing against each other. You know, teams overcome obstacles. Individuals get stopped by obstacles. And then you don't have a team to be able to run through that brick wall. So if I can enjoy rolling dice with Dave Linsk [guitar] or playing cards with Derek Tailer [guitar] or smoking cigars, etc., with the guys, you have a better team. So it's a really relaxed type of lineup with no ego clashes. But it's funny you mention this, because our drummer [Ron Lipnicki] just had to drop out for this whole [European] tour — maybe ten days before [it was scheduled to start], he had some personal stuff come up. But because we're prepared, our soundman [Eddy Garcia], who's part of that team, slid right in. And he's obviously a professional drummer — he plays with a band out of Texas called PISSING RAZORS — but it's not replacement, per se, as much as changing the position in the team. So I think the same mentality with regard to how we look at the band's lineup or the entire touring lineup, 'cause we always use the same people."

On the Paris terrorist attacks:

Blitz: "You know, people are united nationally under flags, but I think when it comes to the human condition, you are united under liberty. My immediate reaction is not sadness; my first reaction is anger. And my second reaction is sadness. And my third reaction is some bizarre solution I come up with in my head. But I do feel a special kinship to the [European] continent, because this is really where we got our start with regard to touring. You know, there was German tours with ANTHRAX and AGENT STEEL, and on with SAVATAGE through Belgium and France, and playing La Locomotive down next to the Moulin Rouge in the early days and later in our career. So you have a special feeling through this whole thing; you feel that your friends have just got it. This has been a community. I mean, these attacks primariliy are about religion and freedoms. What we have, when it comes to OVERKILL or this metal community that we survive in, is something that is on a level of spiritual or religious satisfaction, because you all… It's almost like going to church when you walk through that door. And I think that that's a great thing for it. So, yes, we took the attacks, I think, personally, or myself anyway. And, obviously, we'd love to see changes. And that solution I came up with is no good. [Laughs]" 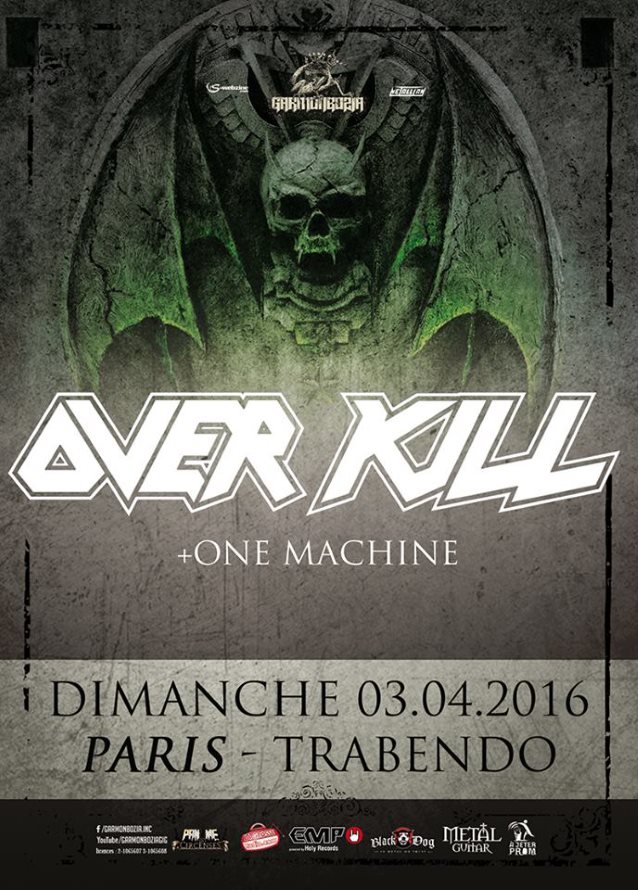