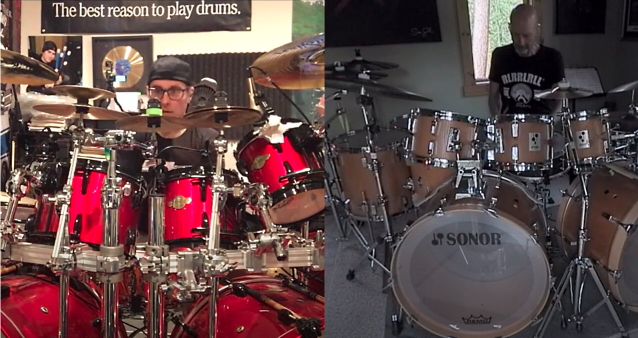 OVERKILL drummer Jason Bittner and ex-JOURNEY drummer Steve Smith have collaborated on "a little jam/duet" video while in quarantine.

The four-minute clip, dubbed "Leaving On The '9'", was posted to Bittner's YouTube channel and can now be seen below.

Jason wrote in an accompanying message: "Here's a little jam/duet that my good friend Steve Smith and I put together under COVID quarantine! Enjoy and Share!"

In a recent interview with Metal Pilgrim, Bittner spoke about what the touring circuit might look like post-pandemic.

"I don't think it's gonna stay the same," he said. "I'll be quite honest with you: I just don't think that we're just gonna go like this and be back to regular life in a couple of months. It's just not gonna work like that. I think that people are gonna be apprehensive, people are gonna be standoffish. I know people are gonna wanna get out too. Trust me — I'm just as guilty as everybody else. I'm going nuts being here [at home]. I love my wife, I love being here with her and the cats, but one trip to the store a week? That's not enough for me. I know I can go out of my house and be in my yard and stuff, but when you don't have that daily routine anymore, it turns into same stuff different day, basically.

"I really don't think the music business is gonna bounce back anytime soon," he added. "It's gonna be a year, I think, before you're even seeing bands that are going on full-fledged tours. I hope I'm wrong — I really do. And I think if anything, I think as far as my situation, OVERKILL, we're very lucky that this is coming at the heels of a tour cycle and not at the beginning of a tour cycle. It's worse for bands like TESTAMENT who just released a record and you're forced to stay at home. But who knows?

On March 3, JOURNEY guitarist Neal Schon and keyboardist Jonathan Cain filed a lawsuit against bassist Ross Valory and Smith, who have been members of JOURNEY on and off since the band formed in 1973, claiming the two attempted a "coup" in order to gain control of the JOURNEY trademark. The suit, which seeks more than $10 million in damages, accuses Smith and Valory of holding an "improper" shareholder and board of directors meetings in February during which they ousted Cain and Schon from leadership posts at Nightmare Productions under the "incorrect" assumption that the company held the rights to the JOURNEY name.