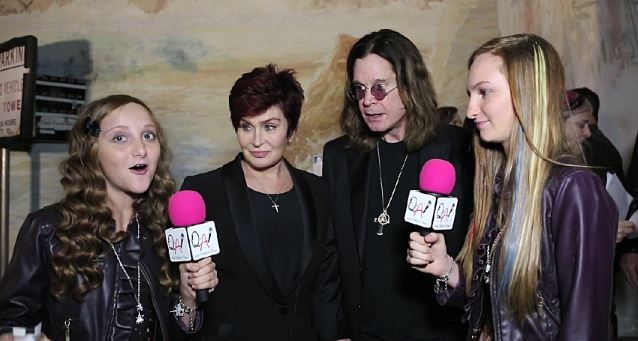 On October 26, "Q N' A With Mikki And Shay" conducted an interview with Ozzy and Sharon Osbourne on the red carpet at an evening of art with Billy Morrison and Joey Feldman benefiting the Rock Against MS foundation at Village Studios in Los Angeles, California. You can watch the chat below.

Ozzy's "Memoirs Of A Madman" CD sold 4,200 copies in the United States in its first week of release to debut at position No. 90 on The Billboard 200 chart. The collection serves as a career-spanning audio release, featuring 17 of Ozzy's greatest hit singles compiled in one place for the first time in his career. Released on October 7 via Epic Records/Legacy Recordings, it is available in a single CD, two-LP set and two-LP picture disc set configurations.

BLACK SABBATH will release one final studio album and tour behind it in 2015, with Ozzy telling Esquire, "The record company wants us to do one more record, and we've decided to do one more tour, and at the end of the tour we just disband and I go back to doing my solo stuff."