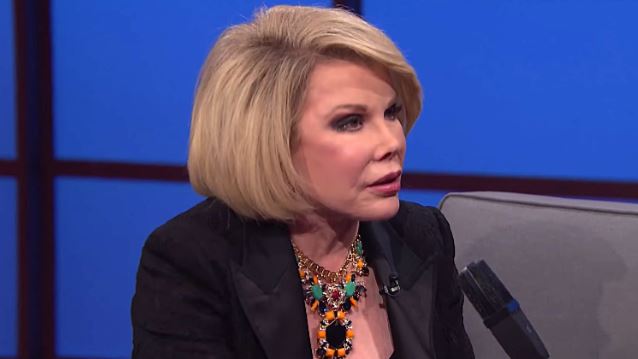 Ozzy Osbourne, Rob Zombie, Dave Mustaine (MEGADETH),Matt Sorum (GUNS N' ROSES),Bret Michaels (POISON) and David Draiman (DISTURBED) are among the rock musicians and scores of other artists who reacted on Twitter and Facebook to the death of comedy legend Joan Rivers on Thursday (September 4). The 81-year-old comedienne and talk show host was hospitalized last week after she went into cardiac arrest at a Manhattan doctor's office following a routine procedure. Daughter Melissa Rivers announced her death on Thursday afternoon.

Rivers first came to prominence as a guest and later guest host of "The Tonight Show". In her later years, she became well known for her red carpet fashion commentary and for hosting the E! show "Fashion Police", which included Ozzy Osbourne's daughter Kelly as a panelist.

Kelly Osbourne said in a statement: "I'm completely heartbroken by the loss of my beloved Joan. Not only was she my boss, she was and will always be my teacher, therapist, closest friend, inspiration and the only grandmother I ever knew. She was family and I will never forget her. Laughter will be difficult for a while but when I'm sad, lonely or upset all I will have to do is think of Joan and a smile will cross my face. ... I will miss you deeply and will always hear your voice in my head saying, 'My darling, get out there and be you!'"

Funeral and/or memorial arrangements for Rivers are yet to be announced.

SO SORRY TO LOSE YOU @Joan_Rivers, YOU WILL BE MISSED. RIP

Not only was Joan a comic genius, she was an amazing woman. Thank you for always having Kelly’s back. You will always be a legend. RIP

I only met Joan Rivers once but she was super cool and really nice. Really sad. #joanriversriphttp://t.co/HEUITBQKyf

My deepest condolences to the family of @Joan_Rivers. She was a very funny lady and will be missed. #JoanRiverspic.twitter.com/dNKZpe7pmF

Very sad news about Joan Rivers. You will be missed! #RIPJoanRivers

Condolences to the family of @Joan_Rivers - she was a true original. #legend

So sad for Melissa and family Please God don't take the laughter away. RIP Joan Rivers

On Joan Rivers-mixed feelings.A Comedy GIANT, who helped out comics like Arsenio Hall. She was HILARIOUS.She could also be HATEFUL. RIP