OZZY OSBOURNE: 'I'm Absolutely So Proud With What I've Done With My Life'

Tickets are now on general sale for this year's blockbuster heavy metal exhibition, "Home of Metal: Black Sabbath - 50 Years". The exhibition opens to the public on June 26 through September 29 at Birmingham Museum & Art Gallery.

From the humble beginnings of 1960s Aston, Birmingham, England, Ozzy Osbourne, Tony Iommi, Geezer Butler and Bill Ward created BLACK SABBATH, in turn forging a new sound, a new aesthetic, and a new musical culture — heavy metal. With the full support of the original founders of BLACK SABBATH, the exhibition will detail the history of this iconic band, and their links to Birmingham, as the early pioneers of heavy metal, in a show that will celebrate their significant contribution to British music heritage and their unique relationship to their fans.

Ozzy spoke of his pride in Birmingham in a new trailer for "Home of Metal: Black Sabbath - 50 Years", saying that he has never tried to escape his Birmingham roots and urging fans to follow their own dreams.

He said: "Well, whatever people think about me — and I don't get the chance to go and see Birmingham very often — I've never ever tried to hide my accent, and I've never denied that I'm from Birmingham.

"I'm absolutely so proud with what I've done with my life; it's unbelievable. Just hold on to your dreams, because you know what? Every once in a while they come true."

He added: "It's an honor to be a part of the 'Home Of Metal'. I am just a guy from Birmingham who's been blessed to have had such dedicated fans throughout my career."

Iommi said: "Fans are our lifeblood; they've always been there to support us."

Butler added: "I've always maintained that SABBATH fans are the most loyal and honest and most independently minded of all. I thank each and everyone of them for their incredible support over the years."

Iconic artefacts and personal items such as photographs, fans' gifts, stage costumes and jewelry, plus more, will be on loan from the band members themselves. In addition, demonstrating the extraordinary scale and diversity of their global fan base, the show will include BLACK SABBATH memorabilia stretching back to the '70s, ranging from gig tickets and mixtapes to motorbikes and battle jackets. The exhibition will also showcase BLACK SABBATH's links to Birmingham with photographs, posters, tickets and programs from local venues that were instrumental in the band 's early success. Also, a collection of 3,000+ commissioned portraits of Metal fans from countries as far afield as the USA, Botswana, Eygpt, Indonesia and Japan will throw light on this huge global community, one which Spotify recently identified as the most loyal across all music genres.

Home Of Metal is conceived and produced by Capsule, under the leadership of its founder and artistic director, Lisa Meyer, and is presented in partnership with Birmingham Museums Trust. In collaboration with Capsule, Morag Myerscough and Luke Morgan, one of the U.K.'s most acclaimed designer duos, will design "Home of Metal: Black Sabbath - 50 Years" for the Gas Hall within Birmingham Museum & Art Gallery, the largest exhibition space in a museum or gallery outside of London.

The exhibition is at the centerpiece of six shows being staged this summer by Home Of Metal, each devoted to the music that was born in and around Birmingham. Music that turned up the volume, down-tuned the guitars, and introduced a whole new meaning to the word "heavy" that has reached into all corners of culture.

For details, go to www.homeofmetal.com. 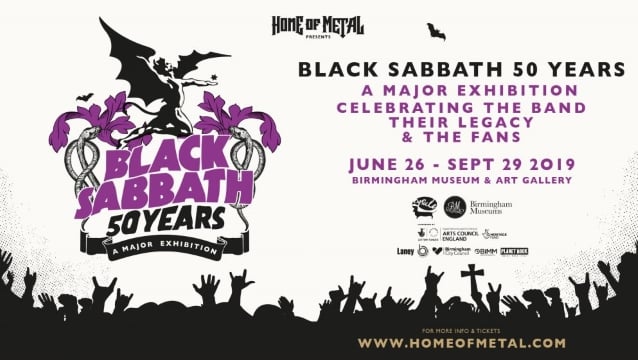