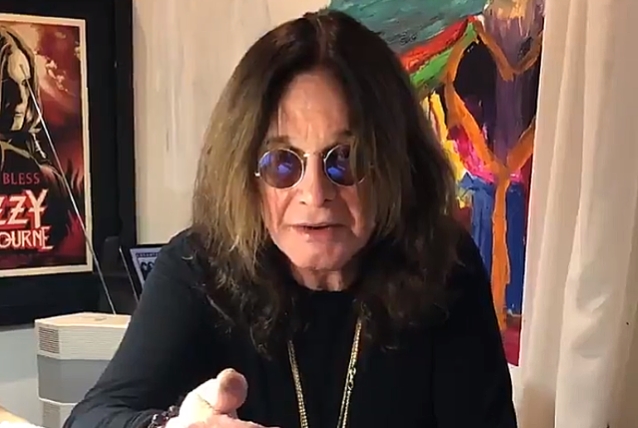 Ozzy Osbourne says that he is "fully recovered" from the staph infection that required him to have surgery on his hand and cancel four shows earlier this month.

The legendary BLACK SABBATH singer issued a video message earlier today thanking his fans for their "concern." He added: "My thumb is fully recovered now. I am looking forward to seeing you all this New Year's Eve at the Forum with Ozzfest. It's gonna be great. Be there."

Ozzy is headlining a special one-night-only version of Ozzfest on New Year's Eve (December 31) at the Forum in Los Angeles, where he'll be joined by ROB ZOMBIE, MARILYN MANSON, KORN frontman Jonathan Davis, ZAKK SABBATH, BODY COUNT and two other acts. The evening will end with Ozzy leading the crowd in the countdown to 2019 at midnight.

Ozzfest began as a groundbreaking traveling festival in 1996 and has morphed over the years into an occasional and sometimes annual destination event. Ozzy told The Pulse Of Radio a while back that he was okay with Ozzfest becoming an on-again, off-again event. "If it takes off again, fine," he said. "If it doesn't, well, that's also fine because, you know, it's been great for us. I mean, we've had a… I'm really happy that we've been able to launch new bands into the arena, you know. A good few many bands got successful from the Ozzfest. You know, we'll see what happens. You never know, it could go on, it could not."

The BLACK SABBATH singer and solo artist recently spoke with Rolling Stone about the staph infection. Ozzy recalled about his visit to the emergency room. "I didn't feel sick, so I was cracking jokes," he said. "The doctor said, 'I don't know if you realize, Mr. Osbourne, this is a very serious problem you have.'"

Ozzy ended up with not one but three staph infections in his thumb and middle finger. He described the surgery, saying: "They cut all this stuff out. Even with the numbing stuff, it was agony. It wasn't pus, but it was the stage after pus, when it gets in the blood and goes in your body and fucking kills you. It may sound fucked up what I’m saying to you, but [the doctor] was really concerned about checking my blood."

The singer has already rescheduled the four scrapped shows for July 2019.