"PROPHETS OF RAGE are psyched to bring a brass-knuckle Marshall stack beatdown to the Louder Than Life festival. We are gonna unleash the RAGE, BRING THE NOIZE and TAKE THE POWER BACK so come on down and get some," said Tom Morello of PROPHETS OF RAGE.

Rob Zombie said: "The Zombie and his horde are ready to throw down and get weird at Louder Than Life. Zombie and Ozzy together again! Dig it! See you in Louisville!"

"It's been way too long since we've played Louisville, and we're stoked to be coming back in a big way to join friends PROPHETS OF RAGE, THRICE and the rest of the amazing lineup at Louder Than Life," said Tim McIlrath of RISE AGAINST.

Mike Einziger of INCUBUS commented: "We're excited to be returning to Louisville and playing the Louder Than Life festival on October 1st with our friends PROPHETS OF RAGE and all the other great bands on this amazing lineup. It's going to be a great show and we can't wait to see everyone!"

Danny Wimmer, founder of Danny Wimmer Presents, added, "I'm excited to have PROPHETS OF RAGE close out the festival. After seeing them in a small setting in L.A., I couldn't wait to get them added to our festivals this fall. Tom, Tim, and Brad from RAGE AGAINST THE MACHINE, along with Chuck D and DJ Lord from PUBLIC ENEMY and B-Real of CYPRESS HILL, playing the hits that made RAGE one of the most iconic bands in history is a special thing to see. Adding that along with OZZY OSBOURNE, INCUBUS, ROB ZOMBIE, FIVE FINGER DEATH PUNCH, RISE AGAINST, STONE SOUR…how could you miss this lineup? And after an incredible run with GOJIRA this spring I can't wait for them to come to Louder Than Life as well. I'm beyond excited for this year's festival. It's a can't-miss experience."

Singl-day and weekend tickets for Louder Than Life will be available at LouderThanLifeFestival.com starting on Friday, June 2 at noon EDT. Tickets and VIP packages start at the following prices. Fans are encouraged to buy early and save, as ticket prices will increase in the coming weeks.

A limited number of GA ticket 4-packs and Zippo VIP 2-packs, as well as camping packages, will also be available starting June 2. Discounted online hotel rates will be available through Curadora. 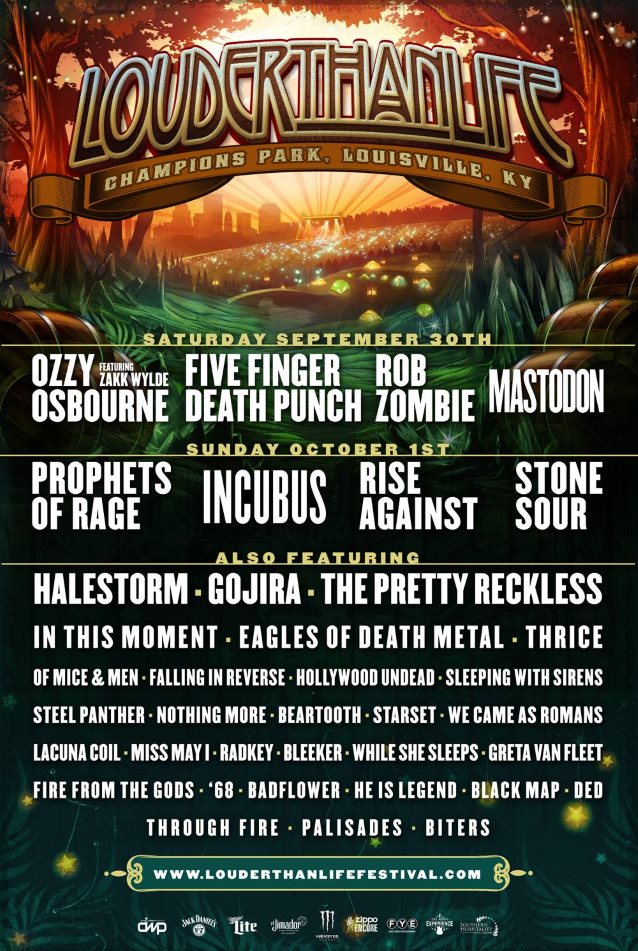