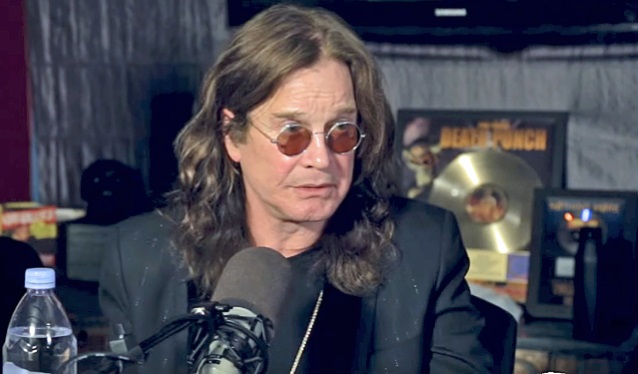 On the origins of Ozzfest:

Ozzy: "How it happened was that [Ozzy's wife and manager] Sharon [Osbourne] tried to get me on Lollapalooza, and they said, 'That music's dead — it's over.' So Sharon said, 'Screw you, we'll do our own [festival)."

On what he credits for his longevity:

Zakk: "A while ago, Ozz quit doing everything at one point. This is when we were staying at the house — me and [Zakk's wife] Barb. The girls were out — Sharon and Barb, they went out to the movies or went out somewhere — and me and Ozzy are just sitting there. He has a cup of tea, and he goes, 'Look at me. I don't drink; I don't do drugs; I quit smoking — I never thought I'd do that; I don't even drink coffee anymore.' He goes, 'Zakk, why am I alive?'"

Ozzy: "I know what's going to happen if I start that again — I'm going to wake up covered in piss and puke, on my own somewhere. I can sit here and go, 'A glass of wine would be good,' and the next thing you know, I'm waking up somewhere I didn't intend to be, in a bad state. 'Cause I can't stop. [It's like] a switch — from fun to necessity."

Ozzy: "I'm coming up on five years. I don't want it [now].. I don't know how we did it. For a while it was fun, but when you cross that invisible line... one day, I wake up in a fucking jail in England. I'm going, 'Where the fuck am I? What have I done?' I said to the cop, 'Why am I here?' He goes, 'I'll read you a charge — John Michael Osbourne has been arrested for attempting murder.' I went, 'What? Who did I try and kill?' 'Your wife.' I never believed in blackouts. I thought it was just a scare tactic. But I started having them."

On MTV's "The Osbournes":

Ozzy: "Having a camera crew in your house 24/7, you feel like a fucking experiment... I said to the guy one day, 'This is driving me fucking nuts. I've got to have a safe room where I can scratch my ass without being on TV.' I go in there one day, and I get this fucking weird feeling, you know? I look in the corner, and there's a camera hidden in the wall. I said, 'I thought this was a safe room?' He goes, 'We wanted to know where you were at all times.' 'Then why is the mic next to the fucking camera?' We pulled the plug because we started to run out of ideas, and plus the fact that it was my own house and I didn't feel safe."

Ozzy: "I retired for about one fucking... I couldn't even retire from this. It's not a job. I'll be here until they put a lid on my box. It's what I do — I've done it for forty-nine years. I don't know anything else."

Earlier this year, Ozzy reunited with Wylde, who played on studio albums such as "No Rest For The Wicked", "No More Tears" and "Ozzmosis" and who has toured on and off with Ozzy for nearly thirty years.

Ozzy has played a handful of solo shows since doing his final concerts with BLACK SABBATH last February. The legendary band wrapped up its forty-nine-year career with a year-long farewell tour, ending with two shows in its hometown of Birmingham, England.

A CD/DVD package called "The End", capturing the final SABBATH concert on film and as a live album, will be released on November 17.

Ozzy will next headline the first day of Ozzfest Meets Knotfest on November 4 in San Bernardino, California.