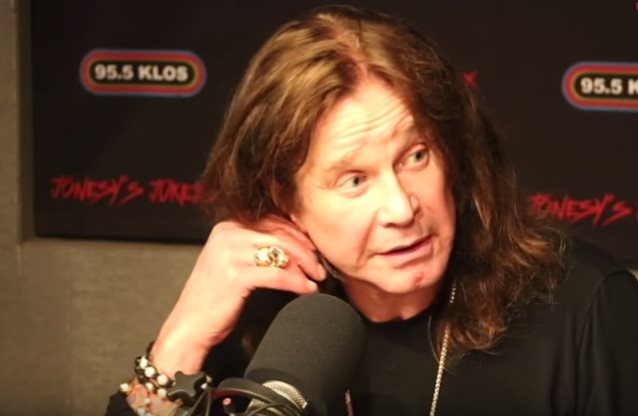 Ozzy Osbourne was interviewed on the September 6 edition of SEX PISTOLS guitarist Steve Jones's radio show, "Jonesy's Jukebox". You can now watch the chat below. A couple of excerpts follow (transcribed by BLABBERMOUTH.NET).

On the end of BLACK SABBATH:

Ozzy: "[It's] done. Over. I've been solo thirty-five years. It wasn't like it was the breakup of the century. One thing I'm happy about is we're all friends at the end of the day. But I'm glad to be back on my own. I [only] have me to answer to now."

"It was good to end it on an up note, 'cause Ronnie James Dio [BLACK SABBATH and HEAVEN & HELL singer] had died and they couldn't do it with him anymore. So it was just a nice way to finish it. It would have been nicer if we had waited another year, I suppose, 'cause it would have been fifty years [since the formation of the band]. But I'm not retiring. How can you retire from this? It's not a job. It's not like I'm [punching a time] card at eight o'clock every morning. It's the best thing that ever happened to me."

On the differences between playing with BLACK SABBATH and performing solo:

Ozzy: "I'm just Ozzy. I just do what I do. BLACK SABBATH is a completely different thing. On my own, I'm all over the place, but with SABBATH, I'm just a singer with a band called BLACK SABBATH. Now on my own, I can choose what I wanna do myself. It's just fun."

Ozzy: "We've just done a few gigs. We're doing one every month. But his playing is unbelievably good now. I hadn't played with him in a band situation for quite a while now, but I'm on stage with him and my jaw drops. He's so fast now!"

More Ozzy shows will follow in September and October, with the final date take place at this year's edition of the Ozzfest Meets Knotfest on November 4 in San Bernadino, California.

SABBATH finished its year-long "The End" farewell tour on February 4 in the band's hometown of Birmingham, England, closing out the quartet's groundbreaking forty-nine-year career with an emotional fifteen-song set.