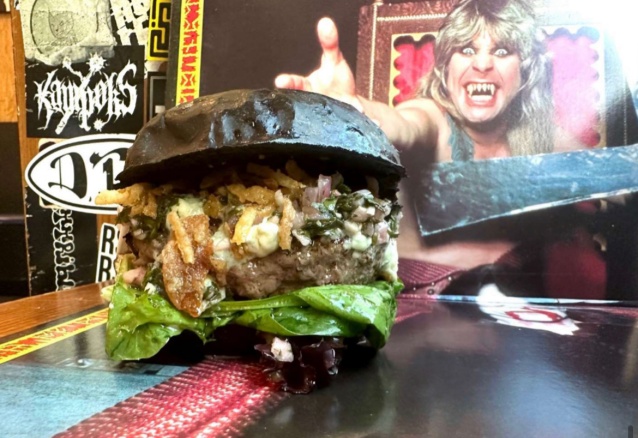 Owner Matthew Chernus and chef Nicole Grasso have created a monster burger fit for the Prince Of Darkness. The Ozzy Osbourne burger is topped with house made chimichurri, garlic aioli, blue cheese, onion frizzle and field greens the monster half pound burger comes served on a black bun.

Just in time for the Halloween season, the burger will make its debut Saturday, October 1. As an added bonus, fans can catch a glimpse of a 25-foot inflatable Ozzy to celebrate the burger's debut. The inflatable has been on a nationwide tour and will make a stop at Grill 'Em All for the burger launch from 11:30 a.m. to 4 p.m. on Saturday.

Launched in 2009 in Los Angeles, Grill 'Em All offers a startling array of gourmet burgers with themes directly influenced by heavy metal music and pop culture.

"We've always been prideful of the fact that we can have our roots firmly planted in the heavy metal world but the food still appeals to a family of four, or just a regular person who likes listening to Britney Spears," Chernus told LA Weekly in a 2018 interview. "The gimmicks, the puns, the burger names, the attitude — it's all a big part of it but at the end of the day it's the burger that is the core of the business."

Regarding how the Dee Snider burger came to be, Chernus said: "The Dee Snider was named because when we created our peanut butter–and-jelly sandwich, we thought it looked like the makeup he would wear. He wore a lot of purple and pink, and we thought the purple jelly looked like him. There wasn't more thought than that. He found out about it and sent us a direct message saying he wanted to drop by the restaurant next time he was in L.A. We didn't even think he would show up. He came in, sat at the bar for two hours and ate three burgers, including his own. We were freaking out because Dee Snider was eating himself. It was super surreal seeing a legit idol of ours sitting in our little restaurant eating a burger we named after him, and loving it."

The Grill 'Em All food truck was the first-ever winner of Food Network's "The Great Food Truck Race", earning the team $50,000.