OZZY OSBOURNE: 'The Story Of' Documentary To Air On Swedish TV

Swedish TV channel TV7 will broadcast a one-hour "The Story Of" documentary on OZZY OSBOURNE tonight (Wednesday, December 31) beginning at 7:00 p.m. The show, which features exclusive archive footage and interview material with the former BLACK SABBATH singer, with be re-broadcast tomorrow (Thursday, January 1) at 5:00 p.m.

For more information (in Swedish),click here.

Ozzy Osbourne, his wife Sharon and their children Jack and Kelly are starring in a new Fox variety show, "Osbournes: Reloaded", which taped its first episode on December 7. The program, the first of six in the series, was taped before a live audience of around 600 people at CBS Television City. One source compared the show to British variety programs and said it did not resemble the recent variety program hosted by Rosie O'Donnell, which was a massive ratings dud for NBC just before Thanksgiving.

The same source said the show featured a mix of sketches, stunts, and taped segments, as well as "a ton of audience interaction." Most of the sketches reportedly parodied the "zoned-out" personality cultivated for Ozzy on the family's smash MTV reality series, "The Osbournes".

Ozzy told The Pulse of Radio last year that following the completion of "The Osbournes", he wasn't interested in doing another TV show right away. "'The Osbournes' was like an experiment that went way over what I ever expected it to do," he said. "Sharon and I have been offered so much TV stuff, but I can't stand it, you know. I mean, I don't like to see me on TV, I don't like to see me on film or anything, you know."

"Osbournes: Reloaded" is expected to air sometime in early 2009.

Ozzy is also working on a new studio album to follow up 2007's "Black Rain".

Photo below courtesy of Ozzy.com: 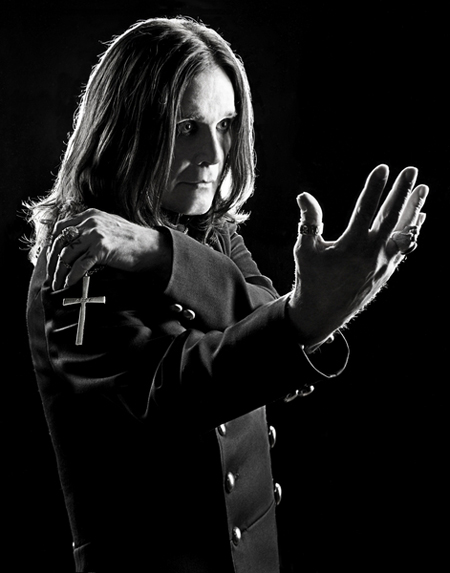