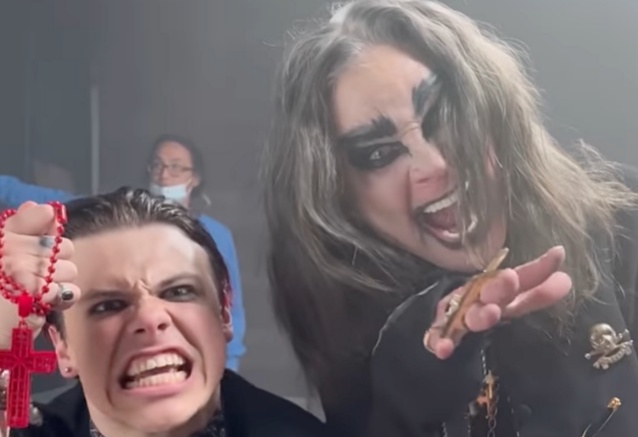 OZZY OSBOURNE To Appear In YUNGBLUD's 'The Funeral' Video

Ozzy, Sharon and Kelly Osbourne will apparently appear in the new video from British singer Yungblud.

The track, "The Funeral", will be released this Friday (March 11),and marks the 24-year-old's first new music since last year's "Fleabag" single.

In an Instagram post on Wednesday (March 9),Yungblud shared behind-the-scenes footage from the making of the video in which he was seen posing for the camera with a heavily made-up Ozzy, as well as hugging Sharon.

Yungblud, otherwise known as Dominic Harrison, began teasing the new single last Saturday (March 5),when he shared an image of a handwritten message "To whom this may concern. For those I let down I'm sorry, for those who let me down, fuck you but I forgive you. You are cordially and graciously invited to my funeral."

As an artist and songwriter, Yungblud lives to stir up the raw energy of rebellion. With his frenetic take on alt-pop equally inspired by punk, hip-hop, and U.K. garage, Yungblud makes brilliant use of his breakneck flow and tongue-in-cheek attitude, delivering pointed lyrics without ever getting heavy-handed.

Born in Yorkshire, Harrison first picked up a guitar at age two and began writing his own songs when he was ten. At 16 he moved to London, then spent the next few years struggling to define his musical vision. But after reconnecting with the firebrand artists that first compelled him to make music — THE CLASH, ARCTIC MONKEYS, N.W.A. — he felt unstoppably inspired. That inspiration lead to the eventual release of his 2017 debut, "King Charles".

Since then, Yungblud has created his own blend of alternative rock: poetry, guitar-hooks and break-beats with a fierce determination to make a dent in pop-culture. Startlingly bold yet emotionally grounded, he drops a grenade on listeners and imprints himself in their minds.