KnuckleBonz has launched a pre-order for the upcoming Ozzy Osbourne "Diary Of A Madman" 3D vinyl, shipping in the fall. Only 1,981 sets were created.

"Diary Of A Madman" is the second solo studio album by the BLACK SABBATH frontman.

"I still remember how excited I was to get this album so close after he released 'Blizzard Of Oz'; two such metal classics rarely happen that close together," says Tony Simerman, KnuckleBonz CEO/creative director.

"Ozzy's stance on this album makes this a perfect subject to create in a 3D vinyl collectible. His '80s madness is coming right at you. This one really shows the creative potential of this new collectible category, I think."

KnuckleBonz has also created a 1:9 scale Rock Iconz Ozzy Osbourne collectible. This "Blizzard Of Oz"-era statue of Ozzy is a limited edition and offically licensed.

According to the Recording Industry Association Of America (RIAA),"Diary Of A Madman" has been certified triple platinum for more three million units sold.

Although the album's sleeve listed bassist Rudy Sarzo and drummer Tommy Aldridge as Osbourne's bandmates, the songs had, in fact, been recorded back in January and February of 1981 by departed bassist Bob Daisley and drummer Lee Kerslake.

On the album's 2002 reissue, the tracks originally played by Daisley and Kerslake were replaced by drummer Mike Bordin (FAITH NO MORE) and bassist Robert Trujillo (now in METALLICA) after Daisley and Kerslake sued Ozzy and Sharon Osbourne over royalties. They were restored for the 30th-anniversary editions. 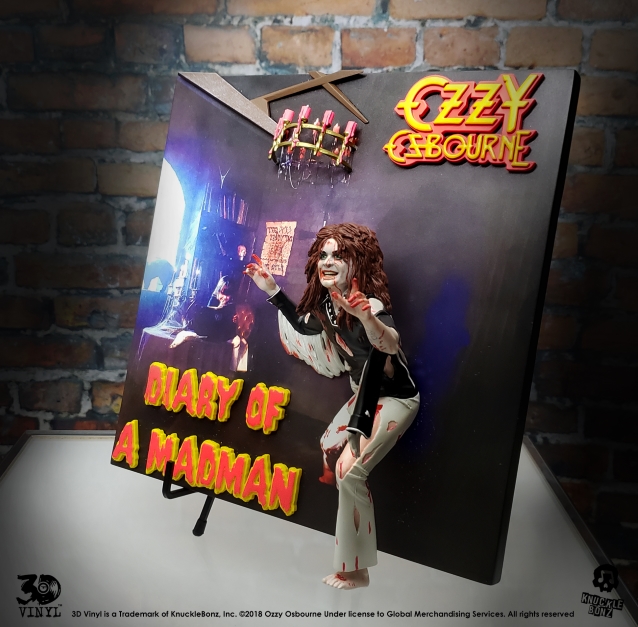