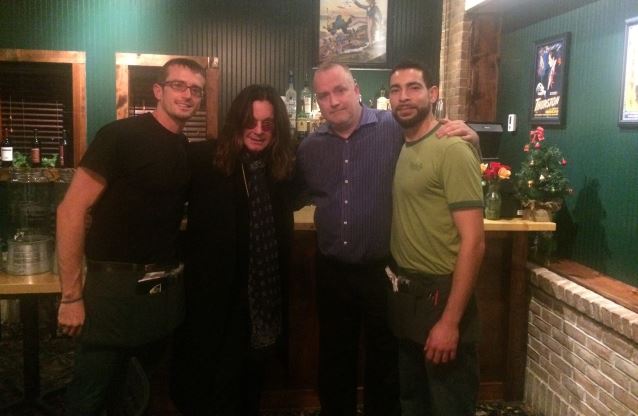 Legendary BLACK SABBATH singer Ozzy Osbourne stopped by the Rachel's Roadhouse restaurant and bar in Butler, Pennsylvania Tuesday night (December 1) while he was in the area filming a new show for the History channel.

Ozzy was reportedly accompanied by an entourage of a couple dozen or so as he ordered an appetizer of chicken wings.

"I set one in front of Ozzy, and I guess it wasn't really his," Roadhouse manager Ron Kappy recalled to the CBS affiliate KDKA-TV. "So he reached to grab it and one of the servers grabbed the plate out from him, and I'm, 'Oh my god, you just took food away from Ozzy Osbourne!'"

Ozzy last month returned to San Antonio, Texas as part of the History channel program — which he is shooting with his son Jack — to apologize for urinating on the Alamo Cenotaph in 1982. He was also spotted around Roswell, New Mexico , where he and Jack visited the International UFO Museum.

Ozzy admitted to The Pulse Of Radio that doing the History channel show will help him fill in some blanks in his own knowledge of history: "Anything past World War II, I'm clueless," he said. "I'm kind of up on World War II 'cause I was born a couple of years after. So I know quite a lot about World War II and Hitler and the Nazis and all that. But anything from before or after I don't know anything about. So we're going to Mount Rushmore, we're going to the abandoned silos where you guys, America used to have their Minutemen missiles and all that. It's quite educational for me, actually."

The Osbournes' new show finds the father-son duo visiting famous places and offering what Ozzy described as "history with an Osbourne twang."

On the music front, Ozzy will head out after that on a farewell world tour with BLACK SABBATH beginning on January 20, 2016 in Omaha, Nebraska.

Guess who came to dinner...Ozzy Osbourne!!! Rachel's Roadhouse Butler was honored to have him as our guest!