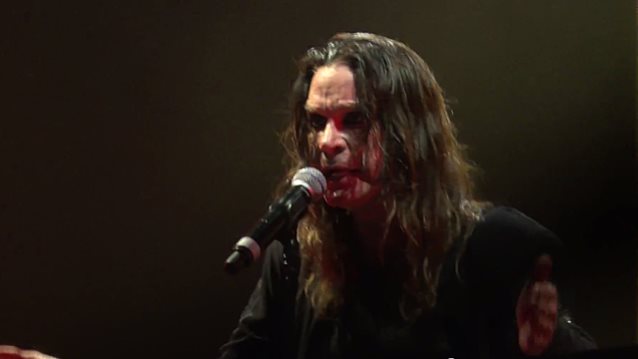 OZZY OSBOURNE: Why There Won't Be Another BLACK SABBATH Studio Album

"13", the first SABBATH album in 35 years to feature original SABBATH members Ozzy, guitarist Tony Iommi and bassist Geezer Butler, topped the Billboard album chart when it arrived in June 2013 — giving the band their first U.S. No. 1 album ever.

Ozzy told NOLA.com about the chances of a new studio effort: "I don’t want to say there's going to be another album, because I don't want you to ask me in another year, 'What happened when you said you were going to do another record?'"

SABBATH announced a second North American leg of its "The End" tour earlier this week. The new leg will kick off on August 17 in Wantagh, New York, closing out on September 21 in Phoenix. The first North American leg will start on January 20 in Omaha, Nebraska, ending on February 25 in New York City.

Ozzy also confirmed to NOLA.com that the tour is really the final run for the legendary metal act. He explained: "It's the end of SABBATH, believe me. In December, I'll be 67 and I think it's time to call it the end of the day."

Ozzy will play his first solo show in some time on Halloween (Saturday, October 31) at the Voodoo Music + Arts Experience in New Orleans. Joining Ozzy as guests will be Slash, RAGE AGAINST THE MACHINE guitarist Tom Morello and Ozzy's BLACK SABBATH bandmate Geezer Butler on bass. Ozzy gave The Pulse Of Radio a rundown on the lineup. "I haven't played with Tom Morello but I've met him a couple of times and he seems a nice enough guy and I've heard nothing but great things about him," he said. "I'm looking forward to seeing him. And Geezer and Slash — we all know Slash. Slash is an entity on his own, you know. He's a great friend of mine as well. And Geezer Butler, I've known him since we were about 12."