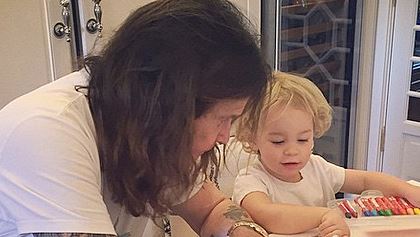 Jack Osbourne, the son of Ozzy Osbourne, has posted an Instagram photo of the BLACK SABBATH singer spending quality time with Ozzy's granddaughter, Pearl, who turns three next month. The caption reads, "Arts and crafts time with Papa."

In a 2014 interview, Ozzy said that he loved being a grandfather. He told he told 97.1 The River: "Pearl is such a great experience to have. I have other grandchildren, but when I had my own kids, I was touring or in rehab. It's a lot better environment now. I can be of service to my family."

It is the first child for Jack Osbourne and Lisa Stelly. The couple is expecting another baby later this year.

Ozzy already had four grandchildren; two each from daughter Jessica and son Louis from his previous marriage to Thelma Riley.

Jack found fame through his family's MTV reality show "The Osbournes" and has since appeared in several other TV programs. In 2011 he produced a documentary about his father called "God Bless Ozzy Osbourne" which, according to The Telegraph, contained admissions from the singer's five children that Ozzy was not a good father in their younger years, and that their abiding memories were of him hopelessly intoxicated, or, more usually, absent altogether.

Arts and crafts time with Papa.