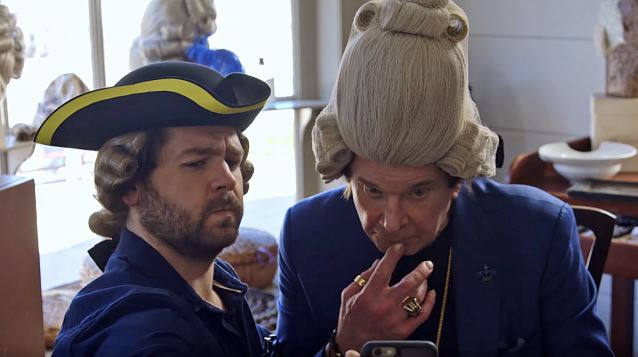 A new preview clip for "Ozzy & Jack's World Detour", the show produced by the History channel starring Ozzy Osbourne and his son Jack, is available below. The ten-episode series is set to kick off on July 24 at 10:00 p.m. and will feature the duo traveling the world together, exploring the history behind some of the planet's most storied sites, while checking out some lesser known locations along the way.

During the course of the hour-long, non-scripted series, father and son — self-proclaimed history nerds who have apparently waited years to take this trip — will visit locales like Mount Rushmore, Stonehenge, the Alamo, Roswell, the Jamestown Settlement and Sun Studios. They'll also stop at places like a missile silo, England's famed Bletchley Park and a private museum of working artillery tanks.

As part of the show, Ozzy returned to San Antonio, Texas on November 5, 2015 to apologize for urinating on the Alamo Cenotaph in 1982. The BLACK SABBATH singer visited the historical monument with Jack.

Ozzy allegedly urinated at the monument the night before his 1982 concert in the Texas city. The singer, who was wearing a dress at the time of his arrest — because his wife Sharon had hidden his clothes to stop him from going outside — apparently thought he was relieving himself on a pile of rubble. He was arrested for public urination and intoxication and was reportedly released on a $40 bond.

Ozzy was subsequently banned from ever playing in San Antonio again, but the ban was lifted ten years later after Osbourne donated $10,000 to the Daughters Of The Republic Of Texas, who maintain and manage the Alamo, the mission that was the site of a famous battle during the state's War Of Independence in 1836. The site is considered sacred ground and a symbol of Texas pride.

Asked what the experience of visiting Alamo as part of the "Ozzy & Jack's World Detour" shoot was like, Jack told EW.com: "It was actually much worse, so much so that we had to chop a bunch of things down in the edit just, because it was really quite charged. There were a lot of people there; we weren’t expecting it to turn into what it did. The city of San Antonio was great with allowing us the access, but in the same boat, they totally threw us under the bus, like announcing at a city council meeting that we were coming. We remained relatively under the radar doing this show and going to San Antonio and having that happen was just like, 'Oh, man.' My dad is great with crowds, and he's great with all that when it's in his setting, but he was a musician in the '80s when there was a lot of aggression toward what he does, and he always worries, Is there that one lunatic in the crowd? So I think that just made him really uneasy."

Ozzy has not starred in a regularly scheduled TV series since the MTV reality show "The Osbournes" ended a four-season run in 2005. A variety show called "Osbournes Reloaded" ended after one episode on Fox in 2009.

Ozzy and BLACK SABBATH are currently in the midst of the European leg of the band's farewell "The End" tour.